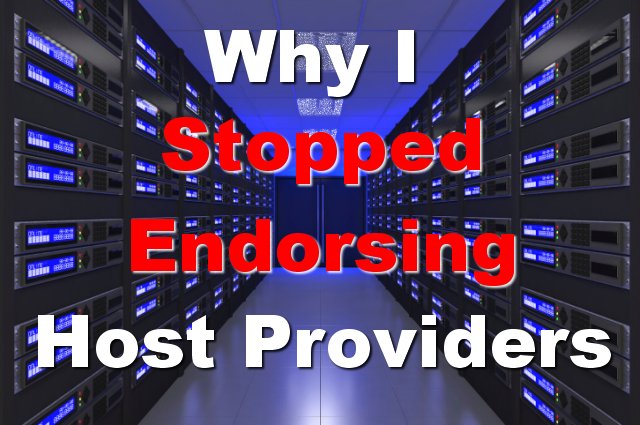 Hosting is one of the most critical elements of site success. And yet, it’s the one thing site owners tend to neglect researching or paying a little more for good service.

It’s always been difficult to find a host that suits all of my client’s needs, has superior support, and remains rock steady in the service they provide.

But now, due to a major uptick in security threats, it’s becoming so difficult, and so many hosts have hit major bumps in the road, that I’ve decided to stop publicly endorsing any host and will stay out of all “which host is best” online discussions. Here’s the full skinny on what brought me to this decision.

As site security and performance continue to be a bigger part of my business, I have to keep abreast of the latest threats to sites. That includes those from exploits of plugin code to attacks on host servers and the software they run.

Due to the evolving nature and escalating frequency of those attacks and exploits, I don’t see how any host can be fully secure and safe every minute of every day any more. Attacks are coming from the outside to whole servers and their networks as well as from the inside through sites that lack proper security and maintenance.

There are going to be problems.

Page load time has always been a ranking factor. Google has upped the ante again by making mobile friendly a ranking factor, and speed is going to play a bigger part in that too.

Where you host matters for speed.

Many hosts are now switching to SSD (Solid State Drives) and optimizing servers for performance. Sites on such hosts just do better. But, there are plenty of enhancements that they don’t tell you about.

Some of those server-side performance enhancements cause conflicts with what else is on a site to the point of making it run slower.

When site owners are ignorant of their server environment, they tend to simply blame the host instead of making the necessary adjustments. This is especially true when migrating a live site from one host to another.

And hosts are getting stricter with enforcing resource overages. Those come from resource hog plugins and a lack of protection from bot hits. Both of which are the responsibility of the site owner. (Read Stop Blaming Your Host for Overages)

These factors have always contributed to why you hear some folks rave about a host while others rant.

Uneven support is another reason. Some folks get great answers and quick resolutions, while others can’t be satisfied. And of course, the entire fault for that is always laid squarely on the host.

And then there are those cases where nothing the site owner has done is to blame and they can’t get the host to investigate fully or resolve the issue, or sometimes even admit they are at fault.

In other words, reports and reviews are all over the place. Always have been. Always will be.

It’s How They Handle It That Matters

Some hosts are being super proactive in how they are meeting the new security and performance challenges. When difficulty arises, some hosts are forthcoming in letting folks know and in taking action.

With other hosts, not so much. They wait until the client contacts them before taking action. And some take no action even then, or won’t give a straight answer about what’s going on.

Although I’ve worked with many hosts via my client’s sites, I’ve only personally had my sites with 3 hosts. And I didn’t leave them without good reason.

The first one, whose name I don’t even remember it was so long ago, had excessive downtime, like for days at a time, and they were not forthcoming about what the problems were, or about the fixes. And it kept happening.

I left, and I encouraged all of my clients to go with me. All did leave that host, and some came to where I landed next, which was on HostGator. They and Bluehost soon became my new preferred hosting providers.

And we all know what happened to both of them once EIG bought them out.

After six happy years, I had to quickly go somewhere else, and landed at A2 Hosting, which is still where I am as of this writing. A lot of my clients followed. And then more came later. And things were good again.

However, the company has changed in the time that I’ve been there. Due to some of those changes, and some recent events over the past few months, I can no longer endorse them for shared hosting.

I’m not moving me or my clients that are on Managed VPS at this time, but that may change.

By endorsing certain hosts, and becoming an affiliate of them, my fortunes rose and fell with whatever happened to their businesses.

Anything can happen to any vendor I use and recommend, including WordPress and associated plugins.

And, as good as the affiliate income is with hosting, I can no longer afford to have my good name and reputation tied to services that are so volatile.

So, I’m pulling out of publicly endorsing any host provider.

I will still make a short list of them available privately to my training/consulting clients, along with their hosting needs. But, it will be up to the client to also do their own research, vetting, and choosing. These are site owners who will have their site properly secured from the root up and know how to properly maintain it themselves as well.

Stick a Fork in Me, I’m Done

I’m done with being blamed for, and associated with, a hosting problem, especially when so many times those problems are with something on the site, or with the hosting at a level that I can’t even see much less troubleshoot.

I’m losing my shirt chasing down hosting problems and being an involuntary bug tester for some plugins. I’m done with both. The security and bug situation is beyond my ability or desire to fix at all levels.

I can make sites run clean and lean and deal with issues as they arise. I can help identify the problem. I can try to prevent problems. But I can’t make things never break or never have problems.

To do that, I need to maintain my trustworthiness.

And to do that, I need to part ways with the hosting wars and all of the collateral damage that comes with them.

I’ve heard some folks say that it’s a good time to get out of everything to do with self-hosted websites and move to platforms where there is nothing for the site owner to concern themselves with other than creating stellar content.

For now, I see that as a step to far. You either have to pay a lot for managed hosting that has restrictions, or go to a free service where you don’t own your site property, and perhaps miss many benefits of a WordPress site.

I continue to look for reliable alternative solutions. If I find any, I’ll tell you about them.

Take Responsibility for Your Site

For now, it’s time for all site owners to be more involved and responsible for making their own decisions about where to call home for their site instead of solely relying on the suggestions of one person, and then holding them responsible for that decision.

The same holds true for performance, maintenance, and security. Very little on a site these days is set it and forget it. Security that was configured a year ago is no longer current. We all have to keep up.

How involved are you in your site? Do you pay someone to handle it all for you? Do you rely on one person for all the decisions about the most important online business property you own? Do you keep up with all you need to for a DIY site?

How did you choose your current host? Have you moved around a lot?

I hope you’ll share your experiences with site ownership, and hosting, and even what you think of my decision to stop endorsing any particular hosts.