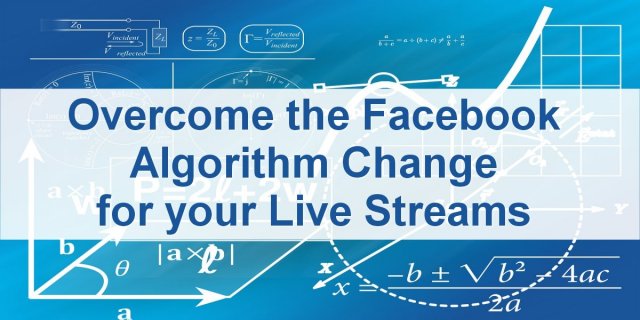 Facebook is changing the organic reach of posts from your business page. Those will also affect the reach on your Facebook Live streams. But, there is a way around it and a good reason to keep using FB Live.

See my BlogAid Today replay at the end of the post for my initial reaction to the news.

On June 29, the NY Times published an article stating that Facebook would be changing their algorithm to focus on friends and family in the news feed.

“The changes will affect all types of content posted by publishers, including links, videos, live videos and photos. Facebook said it expected a drop in reach and referral traffic for publishers whose audience comes primarily to content posted by the publisher’s official Facebook page.”

That means the Reach on posts from your Facebook business page is going to drop again.

The article goes on to state:

“Last year, for example, Facebook debuted Instant Articles, a product that allowed publishers to post articles directly to the social media site. Both Facebook and publishers described the move as a better, faster reading experience for users. Facebook is also paying a number of publishers, including The Times, to create broadcasts for Facebook Live, the company’s new live-streaming video product.

Those features will also be affected by the algorithm change.”

First the social giant partners with, and pays for, publishers and creators and then doesn’t show their content?

Websites of all kinds had to jump through pretty extraordinary hoops to make their posts work on Instant Articles. That cost money.

Doesn’t it all seem like they are shooting themselves, and their partners, in their financial foot?

Here’s what I think

I don’t believe we have all the data.

Facebook didn’t get to be the social media giant by being stupid.

None of these latest moves make any sense. But maybe we don’t have all the info that Facebook does that clearly warrant a change.

How to run end around this

While the organic reach on those may decline, I’m still sticking with hosting my BlogAid Live show on Facebook from my business page.

And here’s how I’m going to get views.

When I host a show, they’ll get notified.

I know that my BlogAid Today tip videos are good for business.

I see the money in my inbox when I do them.

And, I’ve got a nice little workflow going for repurposing them too, including to other platforms.

So, I’m going to keep doing what I’m doing and monitor the reach over the next month to see how this new algorithm change affects that.

Don’t complain, get on the train

Here’s the thing. This video live streaming stuff is like the wild west right now.

Platforms are going to come and go.

The trick is to jump on the train while it’s flying down the tracks. When that train runs out of steam, hop on the next one.

Each platform is just a vehicle. It’s not the destination.

So, drive your car to the airport to fly to the coast to board a boat that takes you to your paradise island.

Don’t be afraid to change vehicles.

Cut your teeth on something and just get started!

When you learn one, the next one will be way easier.

Need help with that?

See my Video Marketing courses. More on are the way!!!!

BlogAid Today reaction to the news