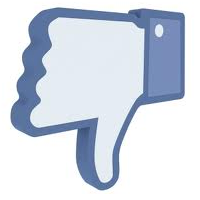 I don’t want Facebook to choose what I see in my feed. Anything less than 100% of the posts from the people and pages I choose to follow and Like amounts to censorship. I’ve had enough of Facebook games both as an owner of a personal profile and a business (fan) page. Have you? Don’t know what I’m talking about? Maybe you should.

I’m truly amazed at how many folks defend Edgerank and the actions of Facebook. As an example, this post by Mike on PostRocket about What’s Going on with Your Facebook Page Reach states: “While it is true that Facebook changed their algorithm, they did this to improve user experience by providing users with content that they’re more likely to engage with. Sorry to break this news, but most brand pages are awful– so obviously they will be part of the group that loses visibility in the Newsfeed.”

This sort of statement infuriates me. It’s tantamount to endorsing censorship based on an unpublicized set of criteria.

The fact is, only an average of 20% of the posts made by business pages are seen by the people who specifically elected to see those posts.

That means that you are missing 80% of what you told Facebook you wanted to see. And, Facebook has decided they know what’s best for you to see and chooses for you instead. That’s censorship.

I’ve seen others who make their living from Facebook, such as social media coaches and graphic artists, also defend Facebook’s policies and tactics. Hey, you don’t bite the hand that feeds you, right? But, if you’re a page owner struggling to build an audience on Facebook only to have it reduced to one quarter, you may tend to not be so keen on these tactics.

And how exactly do they determine what is worthy? If I Like a page, then it’s worthy of reading to me.

My Facebook user experience should be based on my choices. Period.
Anything less than showing me 100% of what I Like amounts to censorship.

Facebook is the only social media platform that does not show me all of the posts from the people I choose to follow.

Facebook has never disclosed exactly how Edgerank works. And, they never will, just like Google will never tell you exactly how they rank websites either.

The really sad part is that users Like a page and don’t realize they are not seeing 100% of the posts from that page and there’s nothing they can do about it.

Even if Edgerank is supposed to key on engagement, if folks aren’t seeing the posts, they have no way to engage.

Facebook encourages businesses to create pages and encourage folks to follow them. There are lots of pages following pages, but those numbers don’t count in statistics. I wonder if their engagement counts in Edgerank. My guess is no.

I can’t count on Facebook to let me see the posts of the pages I follow. Some of those folks report news I need to know. I also subscribe to their blog’s RSS feed. But, most of the time folks break news on social media and blog about it later. Subsequently, I must follow them on G+ and Twitter, or even LinkedIn and hope they post the same info there.

Facebook rolled out promoted post options to business pages a few months ago. You could always buy ads, but promoted posts were supposed to simply increase the posts’ Reach inside the feed. But, folks who have done it state the Reach was not as high as promised.

Wait a second. First they throttle how many fans see the page’s post, then they make the page owner pay for them to be seen? And then it doesn’t work as well as advertised?

What’s up with that?

And now Facebook is offering promoted posts on personal profiles. For $7 you can now advertise one friend to another. Really? Okay, so you’re having a yard sale, or your kid is raising money for their school. I hope that’s all I ever see promoted, but I bet it won’t be, especially since some folks are using their personal profiles for business, which is in violation of Facebook’s TOS.

We’re Not Stuck with This

Facebook is not the only social media platform available. My ROI for the BlogAid business page tanked on Facebook last year. I’ve been spending a LOT more time on LinkedIn and glad for it. Business is booming. Now I’m spending more time on G+ and search engine results have markedly improved.

I don’t have to pay to ensure that all of those who follow me
on LinkedIn and G+ see my posts.

But, there aren’t as many users on LinkedIn and G+, and there’s the rub.

Show Me the Money Until it Hurts

Facebook is the only social platform that is attempting to extract money directly from its users that have free accounts. But, until that hits the masses, they won’t feel enough pain to go through the trouble of moving elsewhere.

For the past three years Facebook has been rife with privacy issues and buggy rollouts. Even those weren’t enough to make people move elsewhere.

When users start seeing ads and promoted posts in their Facebook news feed maybe they will begin to feel the need to move to another platform.

As a business page owner, I’ve already been feeling the pain of Facebook games. And because of that, as a user, I know exactly how much I’m missing on my personal profile.

At first, Aunt Lucy and your best buddy across the country weren’t on Facebook. But, eventually most of the people you want to keep in touch with got on board. If you move elsewhere, like to G+, other folks will come too.

What’s Down the Road

Maybe Facebook will start offering a split of free and premium accounts. With the free account, they’ll only show you a fraction of what you Liked and your news feed will be full of ads and promoted posts. Oh, wait, that’s what you have now.