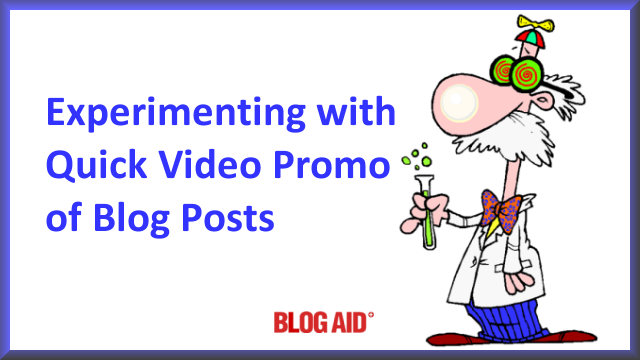 You’ll see what I learned and what I’ll do differently next time.

I recently published a new post on HeartwoodArt for how I built the frame for my new mitre saw station bench.

But I didn’t just want to take a snapshot of the featured image for the post.

I wanted to try making a video promo clip for it.

I see folks use their phone to record their computer’s screen of the post, but I wanted something better than that.

While using still shots to make a Wave.video clip would have worked, I just didn’t have time for that.

Screen recording to the rescue

I use Camtasia to make all of my screen recording tutorials.

There are other screen recorders too, like Screencast-o-matic that are a little cheaper, I think.

So, I decided that the post had so many nice images in it that I would just record me scrolling through it while narrating.

So, that’s what I used to record my video.

It looked SUPER long to me, though!

Plus, when I later saw it on the Heartwood Art Facebook page, it had been cropped to that same 4:5 ratio too.

That was in the feed. If you click on it, the whole length will be shown.

I read through several articles about uploading photos and videos from PC to Instagram.

Most make you jump through a bunch of hoops to do it, or require a paid service.

I tried the trick of uploading the video file to Google Drive and tricking my Chrome browser into thinking it was in mobile mode.

That mobile mode thing works for uploading photos directly from my PC, but not for videos. And I never did figure out how to access my Drive files for either.

I tried the Later app only to discover you need the paid plan to upload videos from desktop.

Gramblr is the uploader I ended up using that worked.

Crop and Caption on Gramblr

I was a little disappointed at first to discover Gramblr crops to a 4:5 ratio, which worked, but cut off the bottom third of the video.

I had made a little lower-third type mask at the bottom of the video with my site link.

I went ahead and posted it to IG, as I didn’t have time to remake it.

Gramblr did have a way for me to add a caption.

So, I also uploaded directly to Facebook, which did show the whole 9:16 length.

However, after viewing both, I think that length is too long.

Next time I will be using the 4:5 ratio to record my videos.

I also learned that I need some movement right at the beginning to alert folks that it is a video.

I thought maybe I would just stay still at the top of the post and narrate for a few seconds, to give folks time to read the title before I started scrolling.

That’s a good idea, but maybe I should include some little moving annotation that says “New Post” or such.

Is this my best work?

But that is why I’m showing it to you.

And you’re usually not going to have pro results right out of the gate.

I spent time learning Camtasia a few years ago. And everything I’ve done with it all these years since made it a fast way for me to knock out this little promo video.

One of the biggest benefits I give myself is the time and space to learn and try new things and to remove the expectation of producing a pro-level product for a while.

READ: Are Your Expectations Out of Line with Your Path to Blogging Success? for more.

It’s Just Faster for Me

Using Camtasia to record me talking while scrolling through the post was a whale of a lot faster than making a template and cropping images and then doing a voice over and such with still shots.

Maybe those are faster for you already.

And this type of video works well on a post with lots of images like I have on Heartwood Art. I don’t think it will fly for too many BlogAid posts, but we’ll see.

In any event, I learned new things and will be making more of these quick promo videos for both IG and FB.

Are You Doing Video Yet?

And I hope this post has encouraged you to try new things and be like a kid with their first finger painting.

Go ahead and tack it up on the frig for everyone to see.