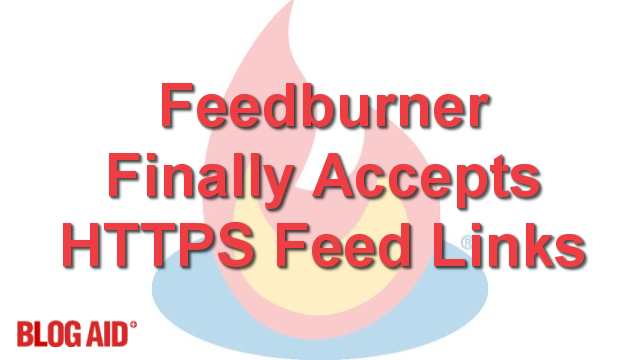 Thinking about converting your site to HTTPS and still using Feedburner to deliver your blog posts via RSS to email for free?

Be sure to update that feed when you do.

And seriously consider moving to a more stable provider to send your blog posts via RSS to email.

Google has been instrumental in beating the drum to get the entire internet to switch to HTTPS for better data security.

And since Google owns Feedburner, I was shocked to discover that Feedburner did not accept HTTPS links for its feed service.

As late as April 2016, Feedburner threw an error if you attempted to update your feed URL to HTTPS. (According to this post from Don Caprio and others I researched.)

Nearly a year later I’m researching this subject again and found no announcement from Google that it had changed its ways.

But it had. Very quietly.

I want to send a huge thank you to John Sawyer, The Small Business Website Guy for alerting me that he had recently been able to update one of his client’s feed URLs to HTTPS.

Google Doesn’t Keep Up with Itself

So, sometime in the past year Google silently made this update.

The silence may have been because Google has not been doing anything with Feedburner at all in the last 5 years.

More on that in a moment.

There have been plugin and other workarounds for the RSS feed situation since 2012.

But this is not the first time Google hasn’t kept up with it’s own edicts.

Has the death of Feedburner Been Adverted?

It’s not like Google has a good track record with it.

Here’s a brief history on Google’s ownership of the Feedburner service. See what you think.

By 2011, Google announced that they were deprecating the Translate API.

Later in 2012, At NAMS, a presenter mentioned that Google is deprecating the FeedBurner API.

It looked for all the world like Feedburner was in a controlled shutdown.

That’s when I jumped off the Feedburner ship.

Then in 2013, Google shut down their RSS reader, and we all thought that was the end of Google being in the RSS feed business.

And then when Feedburner didn’t accept HTTPS feeds, we wondered if Google would shut it down when they figured out it didn’t meet their own criteria.

Thousands of site owners still use it.

And Google did make this HTTPS update recently.

We all thought they would shut it down in 2013.

But the fact is, they just put it on a shelf. They haven’t touched it again in the last 5 years outside of this one update.

And, if their history with it is any indication, they could terminate at any time, and that may come without much warning.

Do You Need to Drop Feedburner?

Yes, and the sooner the better.

You really need to get your RSS to email feed on a more stable platform instead of waiting for this ship to sink without warning.

You don’t want to be caught in a lurch, scrambling to get:

All of that takes time and planning. Better to make your own plan than to be on an unexpected time table.

You know that sort of thing will always happen at the most inconvenient time, too.

No matter what, get in the habit of downloading your list on a regular basis, at least quarterly.

If there’s a choice, get the .csv version, as that can be uploaded to any other provider.

Where to go from here

The reason I suggest these two is simple.

You won’t lose any subscribers.

Both services allow you to import your Feedburner list with no questions asked.

Other services will send an optin confirmation email to your subscribers, asking if they want to stay on your list.

You’ll lose a lot of people that way.

Experienced marketers tell me that it will be between 75-90%. You can’t afford that!!!

The main reason site owners use Feedburner is because it’s a free service.

Don’t even think about sending emails from your host

If you research sending RSS to email for free, you’ll likely come across articles that tell you how to send from your host (where your site files are stored).

You can pretty much forget about attempting this if you’re on bargain basement shared hosting.

You simply won’t have the system resources to get away with all the overhead it creates, at least not for long.

And constant resource overages can get your hosting account terminated, permanently.

Check your site no matter what

During HTTPS site conversions for clients, we do an extensive pre-conversion check.

We’ve discovered that they still had links all over the site to their Feedburner subscription, even though they had already switched to another service.

Be sure to check your social follow icons in your header, sidebar, or other widget areas, as those tend to be the main culprits.

Also check your About and Contact page (including your Contact Thank You page) and any others where you might have a CTA to opt into your subscription.

I provide an extensive pre-conversion checklist to catch issues like this so your HTTPS site conversion process goes smoothly.

And I actually convert the site properly, no plugins required.

Plus, you get all the extra security headers and Google account updates done properly too, including submission to Chrome’s safe site preload list.

Want to learn how to do HTTPS conversions for your clients?

Designers – this training is made with you in mind.

I ‘ve spent over 100 hours researching and testing all conversion methods on the web, including the ones many leading hosts make available. And I’ve put the easiest and best method together for you.

In just one afternoon with the Level 3 Webmaster Training course you can go step-by-step through the process and learn how to do it the right way the first time.

The best part is, one conversion job will pay for the training.