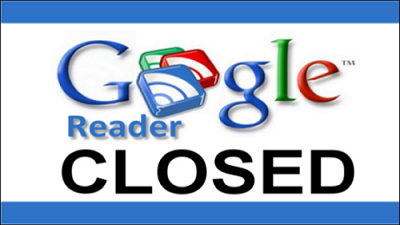 Google Reader will be gone by summer. Yesterday Google officially announced that on July 1, 2013 it will retire the most popular RSS feed reader available. Rumors have been swirling for a year about the demise of Google’s popular RSS feed delivery system, Feedburner, and this is just one more nail in the coffin. Read on to discover how this will radically impact millions who depend on these services to deliver and read countless blog posts. And, see what you need to do right now to prepare so you don’t lose your site readers, like setting up RSS to email options such as those found in MailChimp, Aweber, and FeedBlitz.

Since 2011, Google has closed 70 of its online services. Some of them include apps and APIs created by Google, such as Google Maps API for Flash, and some were acquisitions such as Google Web Security, which came to Google as part of the Postini buyout. Google developed Google Reader in 2005 and acquired Feedburner in 2007.

Then, last summer, a big shutdown hit. Google announced the shut down Feedburner’s API. That was the first clue that Google was getting out of the RSS feed business. Read my post Will Google Shut Down Feedburner?

Feedburner is the delivery arm of Google’s RSS feed services. Google Reader is the receiving arm of that service. And now that arm is being cut off.

It’s simple, G+. Google has bet the farm on G+ becoming the answer to everything.  And it’s way more than a social platform. Way, way more.

In 2011, Google began moving business toward Google+Local. Then it begain moving users of its apps, specifically Gmail, toward setting up verifiable digital identities via G+ Personal Profiles.

And then Google sweetened the deal for online content writers (blog owners) to help the search engine sort the good from the bad from the ugly by favoring posts written by those with a verifiable digital identity. That’s the whole crux behind AuthorRank. (Read Why You Need AuthorRank for SEO) It has become the hottest SEO ticket for bloggers to get noticed in 2013.

If you do not already have your G+ profile set up, do it now. And get busy posting there. Then get busy setting up your AuthorRank.

The writing’s on the wall. Google wants you to post on G+. By taking away Google Reader, they want more of your followers to read your posts on G+ too.

What Else is Next?

Start moving your blog post readers to RSS-to-Email subscription. Start now. The reason for the urgency goes beyond what’s happening to Google Reader. Facebook is making significant changes to its News Feed and posts from business pages are going to get left in the dust.

The only way to ensure that your blog posts get delivered to your fan base is via email. RSS-to-email services are available from Feedburner for free. But if you’re still using that service, you’re taking your chances that it won’t shut down without notice. That’s what thousands of bloggers in Japan woke up to discover one morning when Google suddenly cut off the service there.

RSS-to-email is available from FeedBlitz as well as email services such as Aweber, but both will cost you. The only other free alternative is MailChimp, which offers the service free for up to 2000 subscribers.

Get On MailChimp Now

I’m hosting a webinar on Friday, March 15, 2013 that goes step-by-step through setting up RSS-to-email via MailChimp.

You can also get the MailChimp Video Course anytime and it covers everything about setting up MailChimp, list segmentation, as well as RSS-to-email.

You can also get both the SEO & AuthorRank course and the MailChimp course in the VIP Library, which includes all the WordPress and Genesis videos too, and is about $50 cheaper than getting the courses individually. See all video courses.

No! Folks can still subscribe to your site’s raw RSS feed, they just won’t be able to read it in Google Reader after July 1. But there are other feed readers. And, there are lots of things you can do with your feed, even those for your categories. I show you several great ways to make use of them in the MailChimp course.

I’ve got plenty of free resources on BlogAid for you too. These are no-strings-attached downloads, so go get them right away.

If you’re a little fuzzy on all the parts of RSS feeds, or want to know more about why you should be offering your blog posts via email, here are a few articles you’ll want to read.

NOTE: These posts were written before the rumors started flying about Feedburner, so overlook the temptation to use that service now. I switched from Feedburner to MailChimp, and so should you.

Are you on G+ yet? Are you offering a subscription to your posts via email? I know you’ve probably got questions. Ask away here in the comments and let’s get you some help and clarity and get you on the right track with ensuring your posts stay in front of your readers.

And, to ensure that you stay connected with me, subscribe to the posts on BlogAid right now.