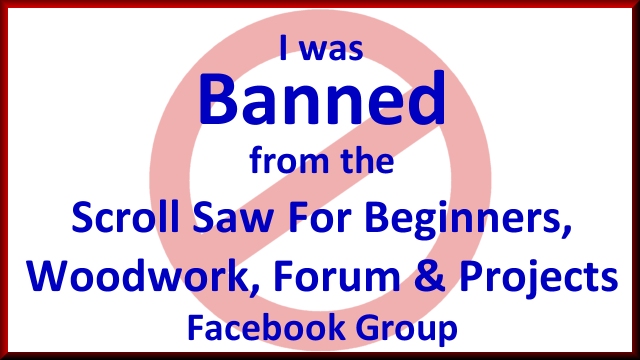 Can you use any image from Pinterest any way you want to? No!!!

See how folks are unwittingly robbing original creators of revenue and how bringing that point up got me banned from a Facebook group.

The idea that anything online is free to download and use without permission or payment or even attribution is pervasive. But the fact is, creators are getting ripped off every day.

Unfortunately, Pinterest is a huge part of this problem, at least for images.

The Cost to Creators

The majority of my clients are in the following niches:

They make money by running ads on their site.

The more folks they can entice to visit their site, the more money they make.

As one of those DIYers trying to get traffic from Pinterest to my woodworking site, I can attest to just how much work it is to create those posts with free info.

And yes, I deserve to be compensated for my time.

That includes being given proper attribution and credit as the originator of the work.

In other words, we WANT folks to share our pins on Pinterest. That means more traffic to our sites.

What we DON’T WANT are folks stealing our images and then redirecting folks to their sites.

We also DON’T WANT folks using those stolen images to recreate what we took the time to make a tutorial on and never giving us proper credit as the originator.

That’s especially true if we sell the pattern or tutorial.

We miss revenue in every way possible.

We are robbed of direct traffic to our site, which results in loss of:

It’s not a little amount of money.

It’s the loss of our primary income.

And that means we can’t continue to run the site.

Would you give 20-40 hours of work away free every week?

So, where does the scrollsaw group come into all this?

When sharing a snapshot of their latest cut, most folks include the machine and blade they used and where they got their pattern.

I consistently saw a few pattern maker names pop up. But I also saw a lot of generic credits of Pinterest being the source of the pattern.

Knowing that pins are stolen all the time, I brought up the discussion about finding the creator and/or ensuring that the pattern was really for free and not stolen.

That set off an interesting discussion with 20+ folks literally arguing that everything posted on social media, or online anywhere, is free of copyright and falls into public domain.

Or that if they only do it for personal use and for gifts, that it’s okay.

Keep in mind that plenty of folks in that group are not just hobbyists. They make money selling at craft shows and online.

Me, and three others in the group, encouraged folks to read the TOS of their favorite social media platforms, including Pinterest, and about the difference in copyright, Creative Commons, and public domain.

Here are the basics.

If you post an original image or graphic online – anywhere – you hold the copyright to it unless you explicitly waive that right.

“Except in unusual cases, Pinterest is not the copyright holder in the images that users pin on the site. Where necessary, you should get permission to use an image from its copyright owner.”

Basically, you retain copyright. The platform has the right to display it publicly and use in derivative creations, such as their advertising.

A Creative Commons license does not waive copyright. As the originator of the image, you still retain that.

And you alone define the terms of the Creative Commons License that you grant others.

That can include any or all of the following:

There are 6 Creative Commons License types:

These are works that have no copyright or trademark.

In general, copyrights do not auto expire until 70 years after the creator’s death.

As of the writing of this post in 2019, any works published before 1924 are now public domain.

So NOTHING created new since 1924 that you see published on the internet can be considered public domain by default. Check to see that it is explicitly stated as holding no copyright or trademark.

My work has been featured in magazines such as Woodcarving Illustrated and Scrollsaw Woodworking and Crafts.

Fox Chapel Publishing owns both of those magazines and is the premier publisher of all manner of woodworking books.

I could have published a book with them.

But here’s what I’ve decided to do instead.

For the past couple of years I have been following woodworker Ana White with great interest.

She makes all of her build tutorials for free for use.

And she encourages folks to share what they built with them, including a link back to their site – even if they have their own tutorial on their build.

What a wonderful community that makes!!!!!!!

So, I’m doing the same thing – posting my build plans for free under the Creative Commons license with a request for attribution.

If I go back to scrolling, I’ll be posting those patterns the same way.

Yes, I know those images and pins are going to get stolen. And I know it becomes another side job to chase those down and get them removed.

But, I know that by doing things this way I’ll make more money than if I tried to sell those patterns in a book or as downloadables.

They Kicked Me Out

Bringing up the lack of proper attribution got me banned from the Scroll Saw For Beginners, Woodwork, Forum & Projects Facebook group.

That’s in spite of me mentioning the above about how I planned to share my own project plans.

I don’t know, maybe they thought I was going to become the Pinterest police or such.

The last post I saw was someone sharing a snapshot of their latest work and listing the source as Pinterest, followed by a defiant YES PINTEREST in all caps.

This sort of stealing, and the whole mindset that justifies it, is not new or exclusive to this group by any means.

But it’s also why I decided not to take up on an offer to create a book of scroll saw patterns.

Eventually they will all make their way into “public domain mindset” and I will no longer get credited, much less paid. Napster was one of the reasons I left the music biz too.

All I can hope is that I got banned for being principled and maybe it will make some folks think twice.

And maybe those stealing the images will remember that post when their hard work is stolen.