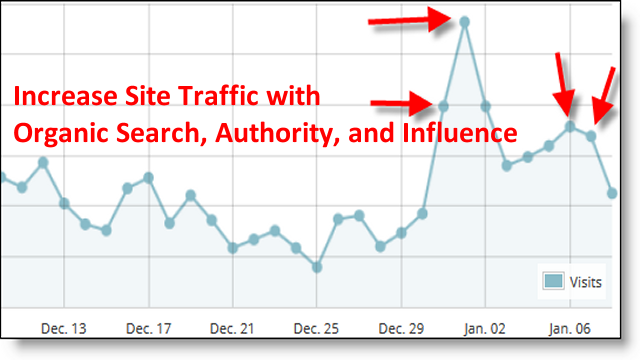 Ranking at the top of Google is the brass ring most bloggers aim to grab. But, that’s not the only way to increase traffic to your site. In fact, off-site SEO, authority, and influential friends are critically important to your site’s success too.

If you’re doing your SEO right, organic search traffic from Google is a holy grail you can obtain. That’s what the big spike is in the graphic above. It was from January 1st, when the news hit about HostGator and other hosting companies being taken down in the big DDoS attack.

I’ve deliberately trained Google to realize that I have authority on this topic. I did that by constantly publishing high-quality content on it. In turn, that content has been shared and linked to quite a bit too. That’s what super content will do for you. Folks naturally want to share it.

So now, when news hits on that topic, I make sure I publish super content as fast as I can. It shoots right up to the front page of Google, and site traffic on BlogAid shoots right up along with it.

Who You Know Matters

See that first arrow, the one just before the big spike? That was a Tips Tuesday post titled Tips Tuesday – Site Success in 2014.

Both of those posts were pinned on Pinterest by one of my clients, +Ann Drake of OnSuttonPlace.com. She’s BIG on Pinterest. She’s teaching me how to use it and I’m running deep performance tests on her site. A fully optimized site is very important to Pinterest folks.

We are both benefiting from the collaboration.

See that forth arrow? That’s another Tips Tuesday post that got shared by several influential folks on G+ including visibility expert, +Denise Wakeman.

Google Analytics tells me that organic search traffic is still my number 1 source. G+ was number 2. But now Pinterest has taken the lead and beats all other social media traffic combined by a factor of 5. And it’s still growing!

This past summer, business doubled in a single day on BlogAid due to a post hitting the front page of Google, and then getting shared by influential people.

In one way or another, that post stayed on the front page of Google for nearly a month.

What You Can Do

1. Pick at least one topic on which you have expertise, and write, write, write about it until Google understands that you have authority in this matter.

3. Make friends on G+ and Pinterest that will be interested in sharing the high-quality content you create. Be a rich resource for them, not a pesky drag on them.

Start Where You Are

I’m so grateful to the folks who are mentoring and helping me do this, including those I’ve mentioned, as well as site designer and marketer, Maria Colomy, who has recently given me a crash course in Pinterest 101, and then some.

The point is, do what you can with what you’ve got. And do more tomorrow. And the next day. Just keep at it. It works. You’ll see.