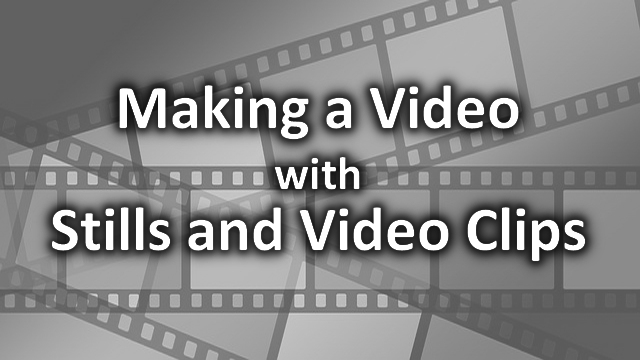 A video does not have to be a talking head type thing. Still shots and quick video clips of you demonstrating what you’re talking about work fine too.

Learn more about my latest video experiment and why I’ll be making more of these.

If you’ve been following this series, then you know I’m focused on telling a story with my blog posts.

That includes the photojournalism with the images I use.

READ: The Art of Storyboard and Photojournalism in Blogging

I’ve extended that focus to my how-to videos.

The latest one for how to Cut Plywood Safely on the Floor not only had still shots, it also had two video clips inside it that show me actually doing the steps I’m talking about.

I wrote a script based on the story I wanted to tell and the still shots that I had taken for the project.

But, the stills just couldn’t tell the whole story.

I need to actually show a couple of the processes in action so folks could see how it easy they were.

I’ve watched several tutorial videos where they recorded the process from start to finish.

In some cases, they just sped up the reply and did a voice over.

That would be great, but I work on my projects in little spurts of available time.

So, doing one long recording session is just out of the question.

But, I can do quick recordings of one specific aspect of the project.

And that’s what I did for this latest video.

Doing the Voice Over

I actually recorded the voice over narration from the script I had written.

And then I added the stills and video clips.

I was prepared to edit the voice over to match the time length needed to show the stills and video clips.

That’s actually a very easy thing to do. It just requires splitting that audio track and moving the pieces into place with dead air in between.

Fortunately, I didn’t have to make any adjustments for timing or such, so that was a huge win.

In fact, one of my vocal inflections just happened to hit at a perfect time with one of the video clips and that tickled me to no end.

Learn As You Go

What really tickled me about making this more advanced storyboard video was that I had acquired the video editing chops to make the audio match if it had not done so naturally.

And that came from years of making videos.

There is no way I could have made this video that easily even this time last year.

It takes doing it – learning – and getting better as you go.

Videos I made a few years ago look pretty cheesy compared to what I’m producing now.

And videos I make next year will be even more polished or have extra features compared to what I’m going now.

And I’m willing to put what I have out there as I go too.

Building a Deep Video Base for More Traffic

Now that this video is out I can move on with the next phase of the bench build, which is actually mounting the saw.

And then I’ll be build the support shelves on each side.

There are handy tips and tricks to both that I had to figure out and do research on. So I know there are others looking for that type of info too.

In fact, I took notes on how many views those other tip videos I watched got and they are big.

That’s very encouraging to me.

Plus, I had to kluge together tips from about 10 tutorials and videos to build what I’m building.

I think having a series where folks can get all of those details from start to finish is going to be big too.

If they find just one of my videos they can find all of the ones in the series, or suggestions for other relevant content from me.

That’s how I plan to get more traffic to my site and more regular followers.

And that’s going to turn into more money in the long run.

So, instead of trying to do just one video with every tip and trick, I’d much rather have multiple videos across a series.

I have more SEO titles and keywords floating out there to be indexed, ranked, and found that way too.

And, I have a greater chance of being promoted as a suggested related video on YouTube too.

Start Where You Are With Video

That’s what I did. I started with my phone.

Then I got a lav mic for better audio.

Then I got a webcam.

Then better software for editing.

And on and on.

I did this over years.

And all that while I was putting out videos and getting better and better with them.

I didn’t compare what I was doing with folks who already had the things I had not acquired yet, including a deep skill set and experience.

I just did what I could with what I had.

I sincerely hope this encourages you to do video in some manner. Even if it’s just encourage clips with nice backgrounds on a free platform like Wave.video or such.

The point is to start with what you have and grow.