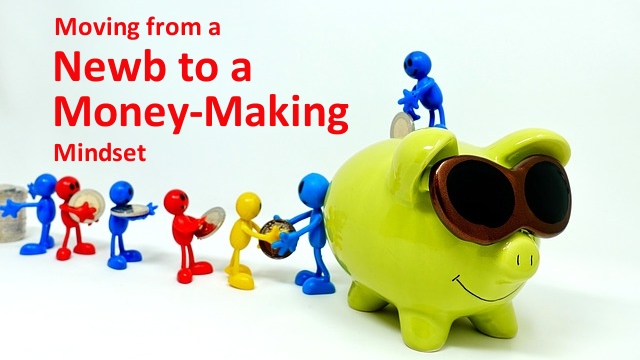 There is a 1-2 year gauntlet that all new site owners go through. The goal is to survive it and avoid as many expensive pitfalls as possible in both time and money along your way to site success.

Here I’ll share a couple of examples of what that journey looks like as a newb site owner moves to a money-making mindset and how an experienced site owner does it, plus an explanation of why we all have to take that journey and how to survive it.

Investing More Time and Money at the Start

I’m ready to write the final post for the mitre saw station build on Heartwood Art and it will include full plans that I’ll be offering for free.

Free build plans are a huge draw for site traffic.

And those plans require that I make a sketch and cut list.

I tried SketchUp and I was initially enthusiastic about learning it, not only for making my own build plans, but for doing video tutorials on it, as those have huge view numbers on YouTube.

Again, another traffic opportunity, plus a chance at monetizing the video.

But honestly, I just found Sketchup less intuitive than I had hoped, and a bit too limited in what I wanted to do with it.

So, I found tutorials on Fusion 360, which I really had not considered before, as it is a pro-level CAD program. You can model a car from the ground up with this thing and even see the engine running. That’s way more than I wanted to try to learn!!

But I found a course from someone who streamlined the tutorials down for hobbyist and woodworkers. I bought the course and I’m learning that program to do my build plans.

It’s fun and it’s worth me investing the time to do as I’ll be making plans for all of my shop builds.

All site owners have two budgets to manage – time and money.

I spent my time budget searching through free SketchUp videos on YouTube, most of which:

So, while I got the info for free from YouTube, I wasted time hunting for that info, kluging together pieces from each tutorial, and trying this and that until I eventually figured out what I needed to know to do the thing I was trying to do.

I would have come out cheaper paying for a course, but I couldn’t find one for what I wanted to learn at that stage.

However, the experience of seeing all of those tutorials energized me, in that I saw what was missing in the niche.

I also saw how many millions of views those videos had gotten over the years.

And because I’m a good teacher, it inspired me to make my own videos and monetize them.

And, I got to cut my teeth on an online CAD program which later helped make the jump to Fusion 360 easier and faster.

It also helped me vet the value of the course I found for it as being more than worth the price.

Yes, I would still have to invest my time budget to learn yet another new thing. But it would be far shorter the second time, meaning I would save time having expert guidance.

And yes, it once again delayed me getting out a blog post.

But considering how many blog posts I’ll make because of what I’m now learning, and the big traffic those build plans will bring in, it’s easy to justify the time.

In other words, the time I spend up front will pay bigger dividends later than if I had not made that investment and published those posts without the plans or with some cheesy SketchUp drawing.

The Journey Out of a Freebie Mindset

I’m working with a site audit client right now that started her hobby blog on WordPress.com.

The hosting was free and it gave her a chance to see if she could make a go of this thing.

Once she got into some blogger groups and/or took some courses, she realized that she would need to move to self-hosted WP.org to use the plugins and methods she needed to capitalize on the traffic she was getting.

Whether she was making money from her site at that point or not, she decided to invest in hosting and a domain and the other things she needed to get a self-hosted site launched.

She was able to grow her traffic to the point of qualifying for admittance to an ad agency.

She also joined new blogger groups of peers who were also making money with ads where she gained new insights about how to run a successful site.

That’s when she found me to help her take her site to the next level by putting it on a secure and fast foundation.

More than that, she was now in a place to vet the value of what I offered – not only in the site fixes, but in the sheer education to DIY her own site from now on.

And, she knew enough to realize that all the free advice in most of those groups is actually worth less than what you pay for it. In fact, it can be the worst advice you’ll ever get.

That site owner hiring me is just like me paying for that CAD course.

But, I didn’t recognize that at first.

Like most folks, I went down the freebie mindset path until I could see the payoff money in doing it at all.

Once I did see that payoff, I was encouraged to devote more time to it until I had enough knowledge and experience to realize I needed to seek out pro help to go to the next level.

And once again, I was investing more time and money to get to that next plateau.

The Journey is the Same

That investment pays off either way.

I’m hearing folks in Pinterest groups who’ve been at it 9 months and are ready to throw in the towel. I see the same thing in member course groups too.

Ask any of my clients and they will tell you that 9 months is a drop in the bucket for site success.

It takes most online businesses, no matter what they are, about 2-3 years to catch fire when it’s a side gig.

The more you know, or the more money and time you can devote to your education, the shorter the time frame for you to make that success happen.

Are You Ready to Move Up to a Money-Making Mindset?

At some point, all site owners wake up to the fact that they are running an online business.

And like all businesses, you have to constantly invest in it with both time and money in addition to the thing that you offer.

I’ve enjoyed long-term relationships with my BlogAid clients since 2009.

They stick with me because they know the value of the info and the services I provide for DIY site owners.

If I offer something, they buy it because they know it will save them time and make them money and it’s a good business investment.

They never miss reading a Tips Tuesday either because that is priceless free help.

Where are you in your site owner journey?

How long have you been at it?

What are the best and worst investments you’ve made with your time and money to move you toward site success?