WordPress 3.2 is scheduled to be released near the end of June. The beta version is out and I’ve given it a test drive, including the new Twenty Eleven theme. Some folks are making a big deal out of nothing with a few of the improvements, and totally skipping the real news on the upgrade. Read on to see what I mean.

On the surface, and at first glance, the new Twenty Eleven theme looks like something new. But with closer inspection, you can tell it is basically a combo of the Duster theme, which was based on Twenty Ten, and the old Kubrick theme, which was the de facto standard for years. 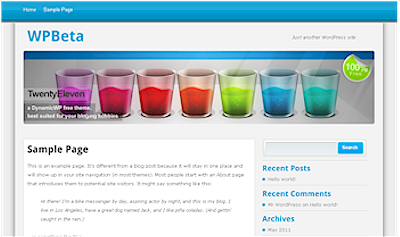 There are more options for the header and color schemes, including flexible header heights. And, you can elect to randomize the header so viewers see something different each time they visit. Not sure this is a good idea for anyone who wants to secure their brand in the mind of the viewer.

And, there’s one more page layout option. All WordPress themes come with two page options that include a sidebar, or a wide page (no sidebar). The new theme simply adds an option to place the sidebar on the other side of the page.

There are several sites with screenshots of the new admin pages. I literally had to go to the admin pages of a 3.1.2 site to compare side-by-side with my 3.2 beta site, and I still can’t see any appreciable difference.

This improvement tickles me because it’s always been available. It saddens me because I heard rumors that there was going to be a real improvement to the text editor, which is, in my opinion, the bane of WordPress anyway. (I give all of my training clients a better editor.)

Basically, you click an icon while in the Visual view mode and the editor opens to full screen. The improvement is that the text area is center aligned on the screen.

If the sidebars on the editor page really bother you, there have always been ways to get rid of them. In fact, it’s something I show to my clients who prefer to work on their laptop, which has a smaller screen. And, that new layout also serves as a handy checklist for steps to take prior to publishing the post or page. (I’ll probably be making a video tutorial on this soon.)

There are supposed to be some updated styles for the Visual Editor buttons too, but I didn’t see them in the beta version.

The default text in the editor is a little bigger, which my old eyes appreciate. But a real improvement would be to get rid of the serif font and replace it with the same sans-serif font and size used in the actual theme. That way you could have at least a shot at aligning images properly. (The editor font can be made to match your theme exactly, but it takes a little special coding. Someone should make a plugin for that! If you know of one, do tell in the comments below.)

The top under-the-hood improvement with 3.2 will be speed. Basically, they de-cluttered the internals. The whole thing is more lightweight and that should speed up page load times.

The next improvement is dropping support for old things that aren’t used (I hope!) by anyone any more, like the programming language PHP 4 and the IE 6 browser. And, support for IE 7 will be discontinued in the near future.

IE (Internet Explorer) is the only browser called out to be degraded. If you’re using IE, that should tell you something. Jump on over to a better browser like FireFox or Chrome.

A Few Other Enhancements

Here are a few of the other minor improvements.

The stable release of 3.2 is expected to be the end of June or first of July. Let me know what’s caught your attention or if you’re just hoping that a new upgrade won’t break your current theme.