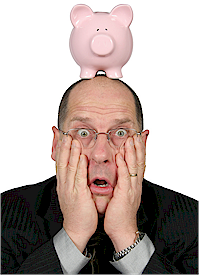 “I’m on a tight budget.” That’s what I hear from most new site owner wannabes. There is no other industry where you can open a legitimate business with no money and no education on how to run it. But too many site owners fall prey to buying into the hype of doing just that. They expect everything to be cheap or free and somehow be successful on sweat equity alone, while grabbing every shiny new thing some guru said works. Free is not free for long. You’ll pay for it dearly, to the tune of thousands of dollars. Let me show you exactly what I mean with real-world examples.

Let’s start with where every first-time site owner starts – the theme. It’s actually the last thing you should do until you learn how to choose something other than just pretty.

I’ve built an entire business helping folks revamp their site once they learned how their theme was actually sabotaging their efforts. Here are a few examples:

Total cost – How much money did you want to make this year? That’s what it’s costing you.

A colleague of mine has built an entire business helping folks recover from free or cheap themes some of which have spam injection or malware code built right into them.

Total cost – Everything. Site’s gone. Your online reputation may be gone with it, especially if you got popped with a Google penalty. Have fun taking the next six months of your life trying to recover from that. (And how expensive does that $80 backup plugin sound now?)

There are a bunch of great theme designers. There are a LOT more ill-educated designers out there who know nothing but graphics and cool effects. They have zero marketing or SEO knowledge. They are going to count entirely on you knowing those things and telling them what you need.

Real-World Example 1
True story. A site owner contacted me to make some tweaks to her theme that she paid $7000 to have designed. She didn’t think it was performing well. Told her the problem was not her theme. It was the content and lack of SEO. Said she was just a casual writer. We had nothing left to discuss at that point.

Total cost – $7000 + whatever she was going to pay to have it tweaked again + all the money she was losing because the site was not performing well, and never would as long as the content and conversion were so weak.

Real-World Example 2
Client contacted me to setup SEO and authorship on their site. I found so much wrong in the basic setup that I couldn’t even start the project until all that was fixed. And then found that the theme code actually fought with the SEO code.

Total cost – $1200 for the initial theme + $95 for me to fix the basic settings + $150/hr for the designer to make code changes (that should have been that way in the first place) + me doing what they hired me for initially.

You can setup your own site. And then you can spend the next year and a lot of time and money learning the hard way how to set it up right.

Real-World Example 1
Client came to me a year prior for help with basic SEO setup. I also found and told her about several security issues on the site, including that there was no backup solution in place. Several months later, she contacted me because the site had been scrambled due to a server glitch.

Total cost – Everything and then some. The site was unrecoverable. The glitch was server wide for her hosting company. There wasn’t even a backup available from them. To add insult to injury, she was preparing for a major product launch in two days. There was no time to build a new site and the launch had to be done from a squeeze page instead. They lost all the wonderful posts they had previously written to build buzz, and had no way to tie them into the new posts that had been scheduled. She had written everything directly on the site and had no local copies of her work on her computer.

Real-World Example 2
Client contacted me to help them re-create a small static site on WordPress. When I installed it, I alerted them to all of the other abandoned add-on domain sites I saw in their hosting package and warned them of the security risk, and that I could not guarantee the security of the site I was installing. Two weeks later she contacted me. All of her sites had been hacked and scrambled to the point of no recovery. The cheapest thing to do was nuke the installation and start over fresh.

Total cost – my fee for reinstalling the site I created from my backup + the cost of rebuilding from scratch all of the other sites that were active and were lost.

Real-World Example 3
Client had a site that a geek family member set up on Microsoft’s Umbraco platform – because that’s what that geek either knew about or found written about online. Then, he setup a blog on TypePad. The client considered himself fortunate to get both done for free. Asked me to set up authorship on both. Couldn’t.

Total cost – $2500 to move both sites into a single, cohesive WordPress site, including replicating the design and features and fixing all the SEO hoo haa caused by having Google index two sites that were not setup properly + doing what he originally contacted me to do, which was setup authorship.

Real-World Example 4
Site owner started setting up her own site. After two months of sheer frustration, she purchased the $1 WordPress Video Library. http://www.training.blogaid.net Then, wrote me eight emails asking questions. After two emails with answers, told her that the video library did not come with 1-on-1 custom support for her site. Told her the same thing on the next six emails and invited her to take a class that would be tailored to her unique needs. Instead, she decided to spend the next seven months trying to piece it together on her own and the site is still not launched.

Total cost – $1 + 9 months of piecing together a site that still doesn’t work + constant frustration + money not earned in all that time.

Real-World Example 5
Site owner launched his own site and installed every plugin recommended by anyone he thought knew what they were talking about. Then he spent the next two months constantly on forums trying to either debug the site or install more plugins to fix what he thought was broken or not performing well.

Total cost – $0 + 2 months of constantly fixing a dysfunctional site + 2 months of earning a reputation as a forum hog and expecting everyone to help him fix his site for free + money lost from site not performing + confusing the beegeebees out of Google and never getting anything indexed right.

How Much Does Free Cost?

Nothing going in. Too much coming out.

You’ve heard the saying, “If you think hiring a professional is expensive, wait until you hire an amateur.”

If you aren’t a pro designer, marketer, copywriter, and SEO, then YOU are that amateur being hired for your DIY site.

Every single offer I have, even the most expensive one, is thousands of dollars cheaper than any example on this page.

It’s a mindset. Stop asking how much something costs to get. Ask how much it costs not to get.

Get in the know about what a site can do and how to work it to your benefit.

How to Save Money

1. Start with content. I turn down clients who want to sign up for classes if they have no content created yet. Most of my designer colleagues have contracts that require clients to provide their content prior to the start of design. We both do this for a very simple reason.

Lack of content is the #1 stumbling block to site completion and success.

2. Learn how WordPress works and how conversion works and why one theme will outperform another for your content and goals.

4. Then, and only then are you ready to go theme shopping.

Every person I called out as an example in this post could have saved thousands of dollars by doing the four things listed here first. Some of them could have also saved all that frustration and heartache when their site crashed too.

I would be making a mid-six figure income if I could trade my salary for what my clients spent on “free” before they came to me.

Contact me when you’re serious about becoming a confident, successful site owner. That’s the only kind of client I take.