I tested 3 popular shared hosting plans in head to head tests. There was 1 clear loser. See why your ultimate site load speed starts with the type of host server you use.

I replicated the exact same test site onto 3 popular shared hosting accounts. The test site mimics the most common elements I see on client sites, including:

These are unloaded tests, meaning no traffic on the site. That matters! I just wanted to get a true baseline first.

There are many factors that make up what qualifies as a good host. These are just raw speed and score results.

But, these tests clearly show that if you’re on the cheapest hosting available, your site performance will suffer.

The following results make it a no-brainer choice to pay a couple of bucks a month more to get better performance right from the start, especially under heavier plugin and traffic load.

All servers are SSD (Solid State Drive) which is faster than a spinning disk. Be sure to look for that in your host or your speed results will be even slower than what’s shown in these tests.

All sites were set to PHP 5.5 and that matters. Anything below that level doesn’t get as much server-side caching, especially with LiteSpeed servers.

These are the minimally viable hosting accounts for sites that receive a modest amount of traffic (between 500 and 5,000 hits/day). I wouldn’t recommend going any smaller, no matter what type of site or traffic you have. They just don’t have the headroom to perform well below these levels. And, they don’t include the speed perks tested here either.

One of the reasons WebPage Test is my favorite tester is because it gives you first and second view load times in the free account. That means you can test your site the same way I do and compare results.

I included GTMetrix and Pingdom scores for you too, but they only include first run results.

Here’s the thing about grade scores. It’s not the grade that matters. It’s what comprises it.

But, I know it’s something that all site owners pay the most attention to, so here they are. 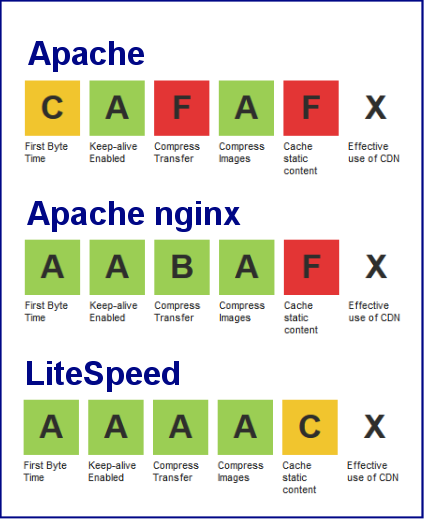 What matters most about these servers is the sheer speed of them and how much they lighten the byte load.

Here are the speed results, and the byte load results follow.

The graphs below show the first and second full load times (first column).

And then the byte size for first and second load (third column).

Apache with nginx and SuperCacher wins for raw speed.

But, LiteSpeed wins for squeezing bytes down.

When you test on a loaded site, both in content and traffic, squeezing the bytes down is really going to matter more than only raw speed.

And this is why some folks have superior performance on one host type while others do not. Their site content and traffic loads are different from one another.

This one element is, by far, the most telling about the differences in host server types.

Look at the next to last column for static caching. This will come into play big for 2nd page loads.

The only red x’s on LiteSpeed are the gravatar images and fonts that are coming from a 3rd party source and are not under the control of the host.

Nail in the Coffin for Apache

Both Apache with ngnix and Litespeed are superior in this area.

And that spells the doom of just a plain Apache host server for getting the job done.

The first image is the number of requests, which is the same for all sites.

The next 3 images are for how each server type squeezed those elements down into smaller data packets that could be transferred faster.

Both Apache nginx and LiteSpeed did an equally good job of it on the first view.

But LiteSpeed far surpassed any Apache server on the second view.

I know you’re going to size these hosts up by the grade scores. But they are truly meaningless without the rest of the data to show what makes up that score.

Focus on the Page Load Time here more than anything else.

For just raw speed, Apache nginx wins hands down. It cuts the first load time by nearly half.

Again, Apache nginx wins raw speed on first load hands down, and again by being nearly twice as fast.

As for what Google weights as important, there is zero difference in which host server you use.

The scores were exactly the same on all 3 sites.

You have to add a CDN (like CloudFlare), a local caching plugin, plus take other measures with your site to improve your scores with Google.

I did not include the Turbo option on LightSpeed because I could not get it to work reliably.

It requires putting some code in the .htaccess file. When I ran header tests repeatedly, it would return both hits and misses on the turbo charged code. I also repeatedly ran speed tests, but saw no appreciable difference.

I’m still doing research on Turbo to see if I can get it to work, but it’s off by default on A2’s LiteSpeed servers, so that’s the way I ran the tests. LiteSpeed with Turbo turned off performs just fine and is not flaky.

These were strictly baseline tests on sites with no traffic.

And the post itself was about medium heavy, as far as content and such. But, for those running ads that come from 3rd party sources, and for those who have resource hog plugins, the results will vary.

However, it is clear that if you get the bottom-rung hosting, especially just plain Apache, it’s going to be super hard to have good performance with your site. There’s just too big a gap to overcome with plain Apache to even get to the default level of what you get with the other two host server types.

The best host is the one that meets your site needs.

Some folks need sheer speed on first page loads, especially if they have a high bounce rate.

Some site owners need superior caching, especially if they have multiple page views.

And heavily trafficked and/or sites with lots of ads need every edge they can get to squeeze out as much performance as possible. That includes optimizing the site fully too, so you don’t overpay in hosting.

Before You Change Hosts

Check with your host to see what type of server you’re on.

Then check to see what else they have available. You may be able to simply upgrade one or two steps in packages to get more speed.

Or, consider moving to a better host.

Both A2 Hosting (aff link) and SiteGround have been good for me and my clients.

Even if you’re on a speedy server, how you have your site setup, including what’s in the hosting account, the plugins you use, and more, can keep you from experiencing top speed.

A site audit can clearly determine your site performance issues, identify all the low hanging fruit, and help you make a plan to bring your site to peak performance.

And if you’re wondering what optimizing your site and hosting account means, let me give you an example.

On A2, I was able to optimize a site that had 10,000 visits a day to run on a lower cost hosting plan that should have capped out at 750-1000 visits a day. (These numbers were verified by two sever engineers at A2.) It saved the site owner $400/yr in hosting. That’s more than the audit and the fixes cost! The site audit paid for itself immediately.

Learn to Run Your Own Tests

Designers and Technical VAs – see how to properly do full site audits just like I do in the Webmaster Training courses. And my Webmaster Level 5 members have access to all of my case study data.