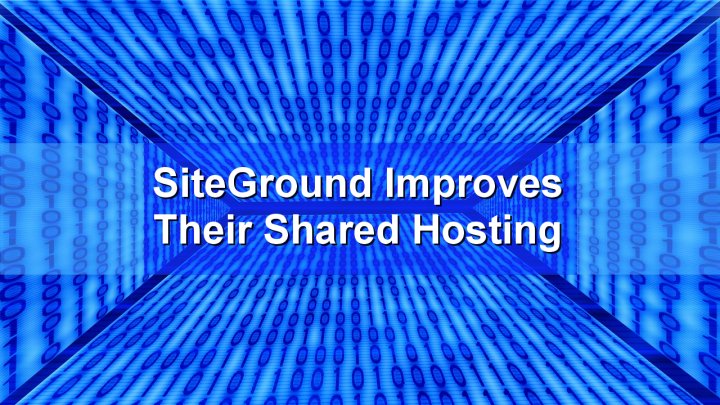 SiteGround announced that they will make major changes to their shared hosting infrastructure starting on February 1, 2016. Here’s what you need to be aware of with these changes.

SiteGround notified their clients that all shared hosting accounts would be migrated to a new server type.

They requested that clients not make changes to their site during this migration period.

There are 3 major improvements

Any type of local cache settings are host environment dependent. That will affect plugins like W3TC and WP Rocket. Some settings that work well on spin type drives will actually slow an SSD drive down.

Also be aware that SiteGround has its own server caching turned on by default.

In working with site audit clients, my tests confirm that turning their caching off and properly configuring W3TC resulted in better performance.

There was no mention in the post of any changes to their default caching.

You may want to take a performance check before and after to ensure your caching combo and base speed truly do improve.

SiteGround will now be able to make more resources available on demand for traffic spikes.

That’s great. But they made no mention of how often these spikes can happen or whether they will charge for any overages.

The whole point of limits on shared hosting is so that one site cannot hog all of the system resources and leave nothing for other sites.

So, this ability to burst more resources to any site is great as long as it’s not habitual. This will keep your site from going down for an occasional traffic surge.

However, I’m betting there is some sort of new tolerance policy in place so that these burst resources are not abused.

Read Stop Blaming Your Host for Overages for more on this topic.

The one big thing you need to know about this is that unless you’re paying extra for guaranteed backups, the one that the hosts takes by default is not something you should rely on for your site backup strategy.

Host default backups are not guaranteed to work.

They are for the host’s use mainly. If a server crashes, they can restore it from their backups. But, your site may experience corruption, or it may not reflect the latest changes to your site.

The fact that SiteGround is making their default backup system lighter and faster is a great thing. It means less load on the whole server, which means faster sites during their backup process.

They may try to schedule those automated backups when traffic to the server is low, like the middle of the night for the country in which the server resides. So, the performance drain was already at a minimum.

So, this is an improvement, but not one that you’ll likely notice. The host must certainly will notice in total drag reduction on the whole server network.

A Word About Shared Hosting

In generally, shared hosting is the lowest of the low for storing and serving your site files.

If you could see what else is on that server with you, it would look like a ghetto – a third world ghetto, with lean-to shacks of tin and electrical wires running everywhere that is a deadly explosion waiting to happen.

That’s the neighborhood you’ve placed your beautiful site in. You know, the one you’ve spent money and time on to make look nice and work well.

One of my designer buddies says it’s like paying for a high dollar sports car and putting crappy, cheap tires on it.

Hosts are doing all they can to start cleaning that ghetto mess up, including taking proactive measures to secure sites and the account, and without the knowledge or permission of the site owner. They have to because irresponsible site owners are not doing it for themselves. (See the post linked above.)

The actions taken by SiteGround in this latest move are mainly benefiting them. There are a few side benefits to the client.

SSD and the new Linux Container make it easier and less expensive for them to maintain the server farm, including both hardware and software.

None of this makes shared hosting a good choice.

It makes it so the host can continue to offer it at a reduced price and remain viable in an extremely competitive market.

Check Your Site Security and Performance

Most all hosts are seriously cracking down on sites that have no security and where bots are running wild.

If your site is running slow, or you’ve been told by the host you need to pay more for a bigger hosting package, then get a site audit and get to the bottom of what’s causing the problem.

I helped one of my clients save $2400/yr in hosting costs.

A site audit pays for itself.