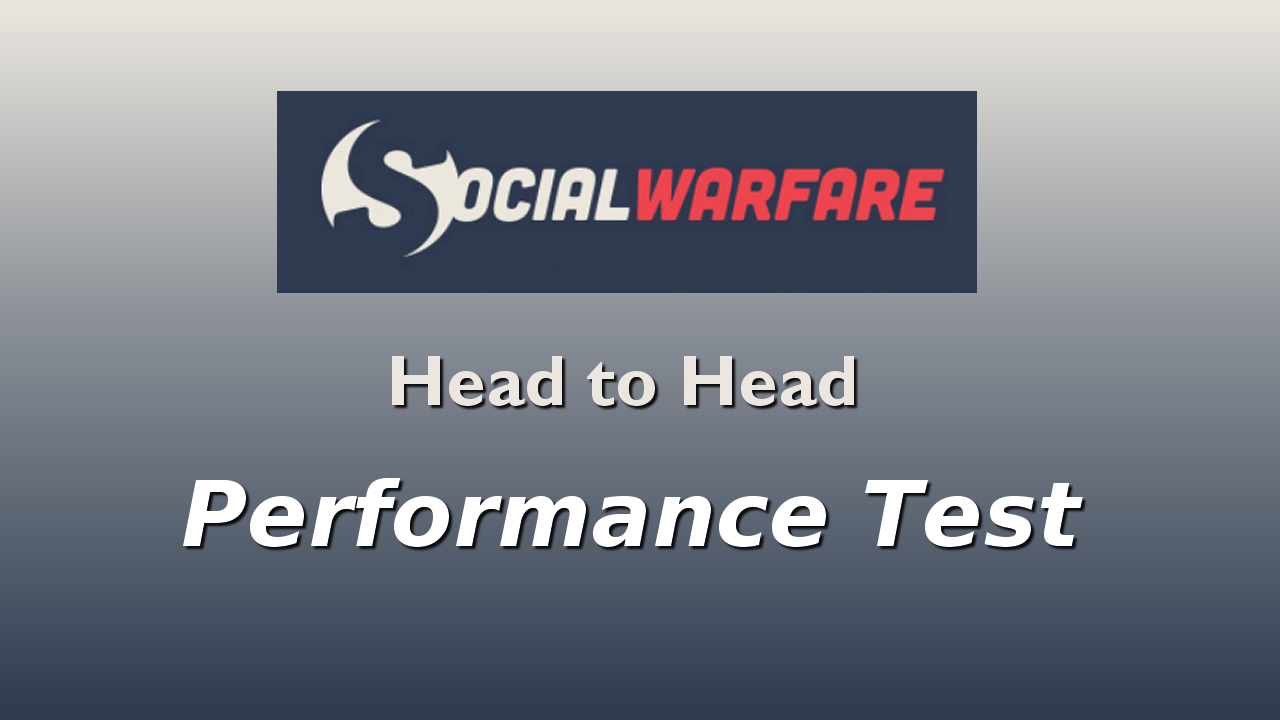 Last year I ran a deep performance test on 12 of the top, free social sharing plugins and came away with a clear winner. This year, I tested the premium Social Warfare plugin against that winner and was surprised by the results. You will be too.

The Simple Share Buttons Adder plugin was by far the undisputed winner in my exhaustive test from the summer of 2014. Read Social Share Buttons – Site Performance and Security Killers for the full stats and a list of the top, free social sharing plugins I tested.

In the 2014 test, I didn’t concern myself with how the plugins performed on mobile. Since Google favors mobile-friendly now, that has to be a concern. Fortunately, both plugins fared well in that department.

Also in the 2014 test I had all share counters turned off, since that was a big performance drain, and not all of the plugins I tested had counters available.

This time, however, I decided to test these two top contenders with and without counters turned on, just to see how much of a drag that posed.

The main reason for this is that the Simple Share Buttons Adder plugin has been revamped for speed and security.

The Social Warfare plugin was built with speed and security in mind from the get go.

You can see a summary of more test parameter near the bottom of this post.

My Webmaster Training Level 5 members will get the full details of the tests, along with all screenshots of the exact stats, included the expanded versions of all requests and exact load times of each one.

Following are the summary screenshots of the baseline, and then each plugin with counters turned on, which is the worst case condition.

What Does All That Mean?

Keep in mind that you can run the same test on the same site without making any changes at all and see up to a 1 second difference in fully loaded times. So, take the differences above with a grain of salt.

That said, there is no appreciable difference in the fully loaded time of the Social Warfare plugin compared to the fastest free plugin.

The Social Warfare plugin is significantly faster on start load time than a free plugin. That matters big.

Even though it has fewer requests overall than the free plugin, it has more CSS and JS files that are making requests. Both of those impact how long a viewer has to wait to start seeing something.

And both of those can be minified with a CDN like CloudFlare (or locally with the W3TC plugin, but I don’t recommend that way. A CDN is far better.)

In other words, you can  basically nullify Social Warfare’s performance footprint.

Considering how power packed the Social Warfare plugin is, the fact that it doesn’t load the system any more than the fastest free plugin I know is saying a lot!

We don’t have to sacrifice performance with Social Warfare, and we get all the other benefits it delivers.

These are the other benefits of Social Warfare that made me want to use it:

I was given a dev copy of the plugin to use. I would have preferred to have paid for it, but there seems to be some issue with my PayPal account doing subscriptions on their site. (I’m told it’s me and one other person having this issue and their support jumped through every hoop possible to fix it. Problem is on my end somewhere and I later experienced the same thing on another subscription site.)

I was given a dev copy with the explicit understanding that it would not influence my review in any way. It’s hard to get a good review from me and I prize the trust my followers have in me above all else.

I’ve been using the plugin on BlogAid for three months. I wanted to give it a good trial run, go through updates, and basically give it time to goof, if it was going to. Like all plugins, it has glitched. They fixed it quickly. The support is good. Even with a glitch, it never stopped working. I just had to change over to another button style for a few days.

Is Social Warfare Worth Paying For?

I spent some bucks this past summer revamping my site for mobile friendly and a fresh new style. I needed a plugin that looked and behaved as good as my site on all devices, including mobile.

I love, love, love the floating buttons at the bottom of posts and the Click to Tweet feature most.

I have not yet taken full advantage of adding customized images that are size optimized for each social platform, but I’m working on it. I hear the new magic resize on Canva is the ticket to making that easy. I like easy.

The fact that Social Warfare can do more than the free plugin I was using, without taking a performance hit, makes it worth paying for to me.

I can’t say that about any other paid social sharing plugin.

And oh yeah, I get more shares with it. Yep, I keep track of that sort of thing.

Here’s the link to Social Warfare

It’s not an affiliate link. I’ll probably get one at some point. I usually do for the things that I use and recommend the most. And this plugin has already fallen into that category.

I used a testing site, just like I did last time, with a test post that had an image on it. But, the site was unloaded, meaning it has no traffic. This is just a bare bones test on a site that has little optimization.

There’s no caching anywhere. In fact, the only speed improvement is the theme, which is Genesis. And, the site is still on the same host as the 2014 test and there have been no major speed enhancements there either.

I also used WebPage Test again, which is my workhorse performance tester and ran multiple consecutive tests to get a median average, which produced the screenshots you see above. I also set it to the Firefox browser, which has less caching than Chrome and is again, the worst case condition.

My Webmaster Training Level 5 members will get all the testing details. Know why? Because they learned how to run performance tests properly themselves, and how to read the results, all of them. And that’s the kind of info that’s in just Level 3. Check it out.