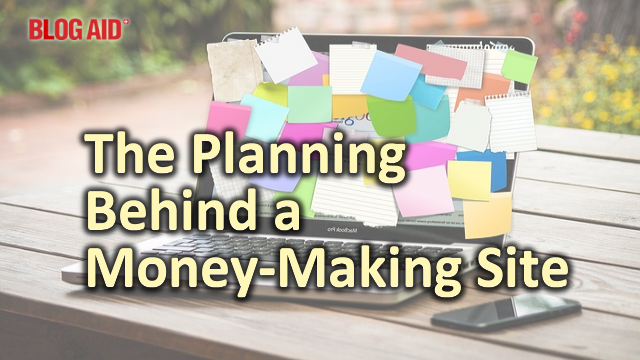 It takes a lot of planning to launch a money-making site, especially if you know what you’re doing.

I see so many new bloggers waste 2 years and $2,000 before they figure that out.

See the planning I did for the re-launch of Heartwood Art including the thinking, the research, and the money.

Suffering From Chicken and the Egg Syndrome

Each part of revamping the process turned into a chaotic scramble of what needed to be done first.

Here’s the shortlist, in no particular order:

Every one of those things had at least 10 bullet points – at least. Some had way more.

Wait on the Site Revamp

This was the only decision that was easy to prioritize. The release of WordPress 5.0 was imminent. I decided to table a theme revamp until after I had a chance to deeply test and play with Gutenberg.

I also didn’t want to do a theme revamp until I had a least 4 blog posts published so that they would take over the bulk of the home page and category pages.

Because I let the site go fallow for a few years, others capitalized on variations of the domain. And, they tied up some of the newer social media platforms with the base name, like on Instagram.

And, because I’m changing the focus of the site, I seriously considered a new name for it.

So, I asked for help from my Site Audit Plus clients in our Facebook group, and one hit the nail on the head – Heartwood Art Creations.

The domain was available and I grabbed it, and then forwarded to the site. (FYI, don’t simply point an additional domain to your hosting. Always forward to the main domain. It resolves faster and will go through Cloudflare for better bot protection.)

That way, if folks type in my Instagram handle, @HeartwoodArtCreations and then .com, they will still come to my site.

You better believe I’m keeping my original domain, though!!! It has what’s called Domain Age on it and that counts for SEO.

Even though I delayed the theme revamp, I still needed some type of new logo for all the social media accounts, and I wanted them to be the same. So I took my original, slapped on the word Creations, and let it go at that for now.

I haven’t changed the logo on the site, and may not, as I am the original Heartwood Art. We’ll see.

I spent some time getting all the info on those social media accounts updated. I’m still working on that.

Delayed by Date for Major Purchases

I got settled into my new house with the new woodshop by first of November and I was raring to go with this new endeavor.

The worst part of all of it was having to wait until the calendar flipped to 2019 to spend money on the big ticket items I would be itemizing for tax deductions. That was based on the advice of my CPA so I would get the biggest tax benefit.

But, thanks to my sweet clients, who were overjoyed at my new endeavor and focus on fun, I received 2 gift cards to the big box home center stores. I made super good use of them. I got almost all of the new hand tools that I would need. And those can be tax deducted as preexisting too. So that was great. And so are all of the other tools I already had, if I wanted to count them. But some are at least 20 years old, and I doubt I’ll be putting those heavy, corded tools to much use now that lighter, battery powered ones are available. In fact, I may sell them off or give them away someday, we’ll see.

But, I had to watch the rest of the holiday discounts pass on the big ticket stuff, except for one that extended past the holiday, and it was on one of the major tool purchases, thankfully.

I had my list, I checked it twice, and January 1 I was making online and in-store purchases.

Brand Buying – For a Good Reason

The buying delay gave me 2 months to research the big peeps in the niche.

I learned a LOT from them – and still am.

One of the biggest lessons was seeing that most all of them use Ryobi tools.

And that led to discovering that Ryobi sponsors a lot of DIYers and folks in this niche.

And that led to discovering the extra coverage those DIYers get on social media with the hashtag #ryobination.

So, Ryobi it was for my powered hand tools.

But, for my chop saw (mitre saw), I went specifically with the Makita brand that had all of the versatile functions I needed. They don’t have nearly the social presence or visibility perks of Ryobi, but they had the solid tool with the features I needed, and for a good price. Priorities – you know?

Two of the things I was really looking forward to with Heartwood Art was working with evergreen content and making an editorial calendar.

I’ve tried it with BlogAid. But no info here is evergreen. And too much changes too fast. There’s always an unexpected thing to blog about.

That also makes it impossible to set up a schedule for resharing posts, especially with any automation help. I had to go week-to-week with hired help too. It’s cra cra!

I made a list of all the posts I wanted to do – each with a very specific purpose – and all building on what came before. After all, I’m a natural teacher and there are plenty of opportunities with this niche to do that.

At least half would include videos too.

During my research I saw several similar videos that had 700k+ views. On top of that, there weren’t that many videos on each of those topics. So, there was plenty of pie to get, as far as traffic.

And I knew I could make a higher quality, better SEO’ed video and post.

All I could hear were the cha-chings going off with all the money I would make on these foundation posts because they would build my traffic numbers fast!

But then I ran into the chicken/egg syndrome thing again.

I needed to do too many of them first.

I needed to have a post on how to use a speed square to reference that in a later post where I’m using it to build something.

I need 2-3 tool review videos to be able to say in any one of them, “come on over to Heartwood Art for more tool reviews and tips.”

It took me another month to stop caring about that and just start posting.

The only real traffic I currently have to the site comes from my BlogAid peeps. And y’all know the back story. And you don’t mind that I don’t have the other posts I’m referencing.

The point is – I just had to let go of it bothering me and start the first posts.

In a month or two none of it would matter because by then I’d have more posts.

Show Me the Money

I already had the hosting and domain, so I’m not counting those in my tally for what this new endeavor cost me to get started. I will count those in this post series when they renew.

And the new domain of HeartwoodArtCreations.com was $19.

As of the first week in January, I had spent $954 on the big ticket tools, hardware, and shop supplies like lighting.

Keep in mind that does not include the things I purchased with the 2 gift certificates, nor any of the project lumber.

I thought I was done with spending big for at least the next quarter. Nope!

All Revved Up with Nowhere to Go

By early January I was primed and ready to start working my plan.

The first thing on the list was a video tool review.

Oh sure, I was okay on camera.

In the next post I’ll share the unexpected delay and budget hit I took to get my shop up to par, and why that investment was so radically important to my success.