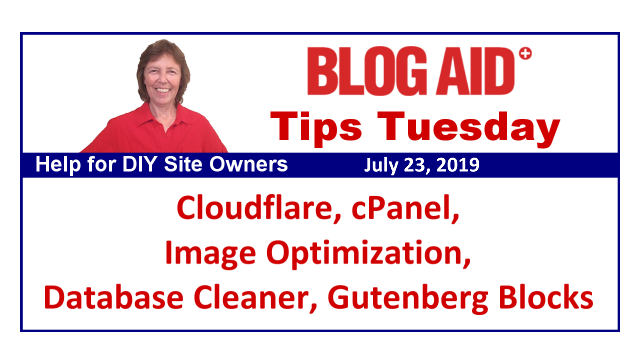 I hope you’ll join for tonight’s livestream at 9pm ET / 6pm PT on the BlogAid Facebook Page. It’s a great way to get the deeper story on what’s reported in Tips Tuesday. And, I almost always have breaking news for the day too. So come join us live for the party.

It’s been another super busy week around here!!

We’re getting lots of site audit and site services projects from the past couple of months wrapped up this week so I’m ready to onboard more new requests that came in during the Super Summer Sales Event where folks specifically asked to start their project around August.

So, if you’re on the waiting list, look to hear from me toward the end of the week for those.

I also finished with my new speed tests for the 2 new speed features in the Cloudflare Pro plan for Rocket Loader and HTTP/2 Prioritization.

They do indeed speed up the site. But, they also have to be tweaked with your local caching plugin on a site-by-site basis. And that runs up the cost of doing it due to all the additional tweaks and testing.

At this time, I just don’t see that it is worth it for most sites, as the gains are marginal.

But, that will change down the road as they continue to improve these new features.

So, I’ll be running tests again early next year and will keep you posted.

In the meantime, I am going to work on releasing my other speed test findings in comparing the premium version of WP Fastest Cache to WP Rocket.

That’s a really big, detailed post and will take me some time to create.

So, look for it in the near future.

But I can go ahead and give you the spoiler alert now – WP Fastest Cache has been the winner by a nose in every test.

I’m not advocating that anyone dump WP Rocket if you already have it.

But I do suggest that folks who are on the free version of WP Fastest Cache move on up to the paid version.

If you are in the Gutenberg Ninja course on Teachable, look for an email from me later this week with a discount code to extend your time over on the BlogAid Learning Center.

I gave everyone on Teachable several weeks of extension already, especially if you got in when the course opened.

But, it’s time for it to come off Teachable and for me to close that school down.

It was a great experiment, and I certainly would have never felt okay about doing all of the work it took to switch over my membership plugins to something better had I not tried that online platform first.

So, I appreciate you helping me test that there.

Oh, I was so relieved to see this blog post from Ryan Gray, the CEO of NameHero Hosting.

You can see more on the livestream I did about it on the BlogAid Facebook page.

I’m booked solid this week with client work and making tutorials that were already on my to do list for Gutenberg and the Webmaster Training courses.

But I want to get a new test account at SiteGround and at least make some full tour tutorials of their new control panel for my webmasters.

And, do a post for the public so you can see what they will be switching everyone to in the near future.

A2 Hosting cPanel Plans Not Clear Yet

I have not heard an official word from A2 Hosting about what they are going to do in regards to the cPanel price increase.

If you see or hear anything, please do let me know.

And I’ll keep asking to see if I can get advanced word about it.

Why Squoosh is My Image Optimization Tool of Choice

Be sure to jump over and see my post from Monday on why I love the Squoosh online image optimization tool. It’s easy, fast, and boy does it ever work!

Plus, it saves images in next-gen formats, which is becoming increasingly important.

The video tutorial is from my buddy, and fellow webmaster, Larry Snow. I could not have made it any better and he was kind enough to let me embed it in my post.

Check Out Larry’s Other Tutorials

Larry has also been releasing a bunch of new video tutorials on MailChimp that you’ll want to see if you use that service.

His latest ones cover tags, segments, and groups.

So be sure to check out his whole YouTube channel as he has lots of super tutorials on securing your social media accounts and such too.

The nice folks at the Mediavine ad agency are developing their own theme framework that will be a strong competitor for Genesis.

In their latest post they give more details about what the theme will be able to do, and why they made choices they did in the build.

They are in beta testing now and I believe I heard in previous posts that they are shooting for a November release.

I also want you to notice at the end of the post that they say to get your site speed taken care of now so that you can actually benefit from the speed of Trellis when you switch over to it.

That means one thing – come get a site audit and see what’s slowing your site down now.

At the end of the Shapers July meeting recap, a discussion was started about putting more Genesis theme functionality into a plugin.

I don’t know how I feel about that.

I think the way Feast Design handled putting so much functionality into the theme, and then getting burned on that, and pulling those functions out into a paid plugin has made me super wary of this practice.

But, Feast Design is not the only theme developer doing this.

The creator of the Mia child themes does it too.

I guess we’ll wait and see what comes of it before I offer an opinion. You know how I like to test stuff and make decisions based on the data.

WP-Optimize is Now a Caching Plugin

WP-Optimize has turned into a full caching plugin.

To be fair, WP Rocket and WP Fastest Cache premium both have database cleaners, so I guess WPO was losing market share.

And I suggest you remove it from your site if you are using it for that, as it may conflict with your real caching plugin.

In fact, check into your caching plugin and get familiar with its database cleaning options and use those, as they will likely be just as good as WP-Optimize was for it.

If you do need a straight up database cleaner, look into WP-Sweep.

The Gutenberg devs are working on a new Admin sidebar tab for Blocks.

It will be similar to the sidebar tab we have now to your plugins list.

And, it may come with a “try before install” feature too.

You’ll also be able to see any 3rd party blocks you have installed.

And I’m really excited about this new feature. They plan to put a link for easy access to your Reusable Blocks.

So, we’ll be looking for this to come to the Gutenberg plugin first, and then roll into WP core when it is ready.

Many themes now have an After Entry widget area so you can have a widget that appears after your post content.

Folks typically use it for an optin.

And folks who have switched over to fully Gutenberg block themes are using Reusable Blocks for that. But you either have to remember to add that block at the end, or start your posts with a Reusable Template that has it.

Having that widget area built in saved you from doing that.

And the concept can go even wider.

The developer, Felix Artnz, says this about the extended possibilities:

“Think about a block that renders the site title, the custom header, a menu, the copyright information – taking Gutenberg to the site level opens up a whole new set of typical blocks that would be required,” Arntz said. “Start thinking about which blocks you would need outside of your post content bubble today.”

This is the future of themes, y’all.

And this is why you want to get into using Gutenberg sooner rather than later, so you are prepared to keep pace with what’s coming.

My Gutenberg Ninja course is here to help you do just that.