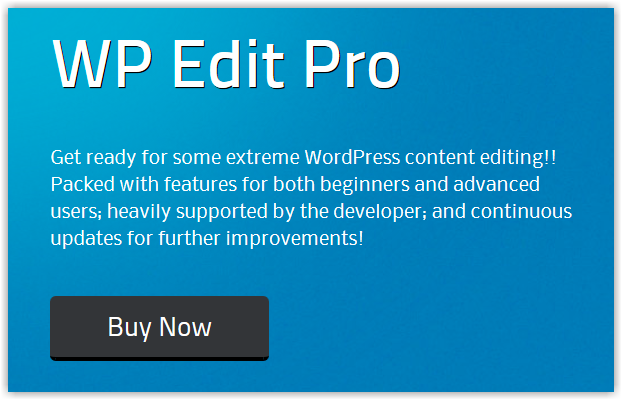 WordPress 3.9 saw a major overhaul of the TinyMCE text editor engine. And that affected every plugin that depended on it, especially advanced text editors. While TinyMCE Advanced developer Andrew Ozz chose to revamp his popular plugin, Josh Lobe has elected to go another route with the Ultimate TinyMCE plugin. It does not work with WordPress 3.9. Instead, there is a Pro, meaning paid version available that does. Read on for more of the changes, including what else you can get in the paid version that has nothing to do with text editing.

Update: There is a free version of WP Edit in the WordPress repository. The more advanced features are found only in the Pro version.

The information on the WP Edit site is a little sketchy. Here’s what I gathered about the new costs and what comes with it.

A single site license of WP Edit is $35.00 that allows you to use it on your own site.

A developer’s license at $279.00, which also includes the ability to sell sites with WP Edit Pro preinstalled. And that’s where it gets a little sketchy on details. I couldn’t find any info that listed the specifications of the sites. You have to join as a member first. And there were no details on how a developer sells or controls these other sites either.

The toolbar icons are easily arranged and they even have settings to determine what tools are available based on the user row. In other words, Admins can have access to more tools than a person assigned as an Editor or Contributor can.

There are also “dozens” of custom bottons. Only three of them are listed on the plugin’s site, which are YouTube, CodeMagic, which is an advanced code editor, and LoremIpsum, which generates placeholder text content. These custom buttons will be very handy for developers.

Creating a Text widget is not that difficult without a special text editor plugin. You can create a page, save it as a draft, copy the code, and then paste it into a Text widget.

But with WP Edit Pro you can create custom text widgets in a separate editor page, much like the Post and Page editor pages. They are displayed in their own lists too, just like Posts and Pages. And, you can assign them different widget tags and categories to help you manage them.

Here’s another feature with sketchy details. On the Features page for the plugin, it states that there are eight option tabs for things like Google Webfonts, custom Widget Builder, custom user role button configuration and more.

But then on the Member Plugins page, it states there are plugins to extend the functionality for things like custom styles, advanced configuration, and Google Webfonts. But then the only plugin listed is for Custom Styles.

One of the other features touted is that the plugin is “network ready.” But what it is really referring to is the ability to auto detect a multi-site installation. And, it also refers to how the toolbars can be customized in the text of this feature too, which has more to do with user roles.

Most of the features of WP Edit Pro are geared specifically to developers and designers. Coupled with the ability to resell sites where they intend to do maintenance on a multi-site installation, this combination may be very valuable indeed. That’s especially true if they want to limit user access to certain tools that code goof up the theme styling or such.

For the average user, though, the language on the site could use a lot of improvement to tell you exactly what you get.

For a single site license, I honestly can’t tell from the info I was able to get from the plugin’s site if it would be worth paying for versus the free TinyMCE Advanced plugin, which has all of the advanced editing features that most users need.

Did you use Ultimate TinyMCE prior to the WordPress 3.9 upgrade? If so, are you a developer and are you going to pay to keep using the features in WP Edit?