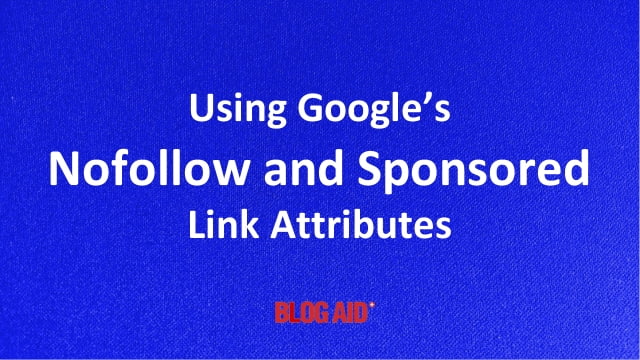 Affiliate marketers – get the scoop on Google’s new sponsored link attribute and how nofollow is now regarded. Plus, see how to add these links manually.

In September 2019, Google announced that they will now regard nofollow as a hint, not an explicit directive.

They also said there would be no perk nor penalty for whether you used the new link attributes or not.

Due to comments and oEmbed as well as social media widgets, it’s super easy for WordPress sites to pull in all manner of content that was not created by the author of the site.

It will help Googlebots sift through the various authorship of the content that is in a post.

I expect we will start seeing such link attributes automatically added by WordPress itself someday on our blog comments.

And, we may see it show up in plugins that help you display content from other sources.

I don’t see this attribute as something we will be manually adding at this time.

Follow the Tips Tuesday post/podcast/livestream for updates on this.

The nofollow link directive has been around since 2005 and was initially created to combat comment spam.

Even though WordPress marks all comments as nofollow, it hasn’t really deterred spammers from dropping those comments anyway.

The nofollow directive has since been interpreted by Google in two ways.

One of the ways Google finds out about new sites or pages is to follow a link from the site it is currently crawling over to the new content.

All links are considered dofollow unless you explicitly tell Google to nofollow.

The nofollow directive is particularly important for affiliate links.

You don’t want to vote for an Amazon product or such.

That’s what is changing with this latest tweak.

Google will now take nofollow as a hint, not an explicit directive to ignore the link.

Google may also consider the link for ranking purposes, even if it has the nofollow directive.

Its bots may choose to go see what the other content is.

In March 2020, Google plans to start deciding if it wants to also crawl and index the content from a nofollow link.

In an effort to split the two parts of nofollow, and get some clarity about why you may be using it, Google has created a new sponsored link attribute.

It can be used to clue Googlebots that you may receive a commission or other financial benefit if folks click that link.

For affiliate marketers, that means using nofollow in combination with sponsored when linking to affiliate products.

That way Google knows that the site you’re linking to may or may not be worth ranking higher, as it is not getting an organic link vote, it’s getting a potentially paid link vote.

Let me give you an example of the difference between these two.

I like a certain host. And they have a very informative blog post that I think you’ll appreciate. So, I link to it in my Tips Tuesday roundup. That’s an organic, dofollow link. And I hope my link vote for it does help it rank higher because it’s good content.

On the other hand, if I suggest that you move to that host and give you my affiliate link to use for your purchase, I would include the nofollow sponsored link attributes. I don’t want Google to consider my link a vote for their site because I’m being compensated for that endorsement.

Adding the sponsored link attribute helps make it clear to Google why I’m using nofollow too.

Reasons to Use Sponsored

When this news first broke, word was to not change your existing links.

That advice lasted for about two weeks.

Word now is that you should use the sponsored link attribute, in combination with nofollow, for all affiliate links.

Anything you can do to help Google understand your content is a good thing to do.

Although there are already several plugins to help you add nofollow attribute, which will likely update to include the sponsored attribute, and even help within WordPress to add a directive to open links in a new tab, you don’t want to go that route.

First, you want to stop having links open in a new window/tab.That is a security issue and very problematic for affiliate marketers due to the inconsistent way WordPress has been handling the fix for that security issue since the release of WordPress 5.0

Second, you want to add any other link attributes manually.

We are already seeing popular plugins dropping out of the game because they don’t want to retool for Gutenberg compliance.

How to Manually Add Link Attributes

See my Ultimate Guide for Creating Links in WordPress

You’ll see videos for creating every type of link using:

You’ll also get more details on the security issues with opening a link in a new tab/window and why it’s a bad mobile user experience now too, which is another SEO ranking factor.

Google will now consider nofollow as a hint about ranking.

In March 2020 it will also consider nofollow as a hint about crawling and indexing the receiving site.

Do You Need to Update Old Links

There is no urgency to do a mass update of affiliate links on your site to add the sponsored attribute.

However, you do want to use the new attribute going forward.

And you will want to update any resource pages you have that are full of affiliate links.

Plus, you’ll want to make a point of updating the links on any old content you revamp, or on your top posts.

While Google has officially stated that there is no perk or penalty for not using the new link attributes, I’d bet money that we will see case studies with data to the contrary within 3 months of this change, and even more after Google makes more tweaks to it in the spring of 2020.

Why is Google Doing All of This?

Links are the backbone of Google.

Pro SEO agencies take advantage of this in some pretty slimey ways by building sites whose sole purpose is to help money-making sites rank by giving a bunch of dofollow links to it and/or filling it with nofollow affiliate links.

Ever go to a high-ranking review site for something you want to purchase and it’s filled with reviews that are obviously spun content and it’s clear the reviewer has never used the product?

Many pro SEOers have found those to be a super lucrative way to put their skills to use with knowing how to get a site ranked. And in too many cases, the affiliate commissions earn them more than doing SEO for clients.

On the other side of the coin, some really big publishers make all links nofollow by default for fear of litigation. It’s really not fair for these big publishers to base their references on high authority sites if those sites don’t get some ranking perk out of it. And while they get a link mention and maybe some click-throughs, it passes no SEO ranking juice to them.

Google needs a better way to sort all of this out.

While most bloggers, and especially affiliate marketers, are not in either one of these camps, we still need to participate in link attribute best practices so Google has an easier time of making sense of our links and seeing that our sites are legit.