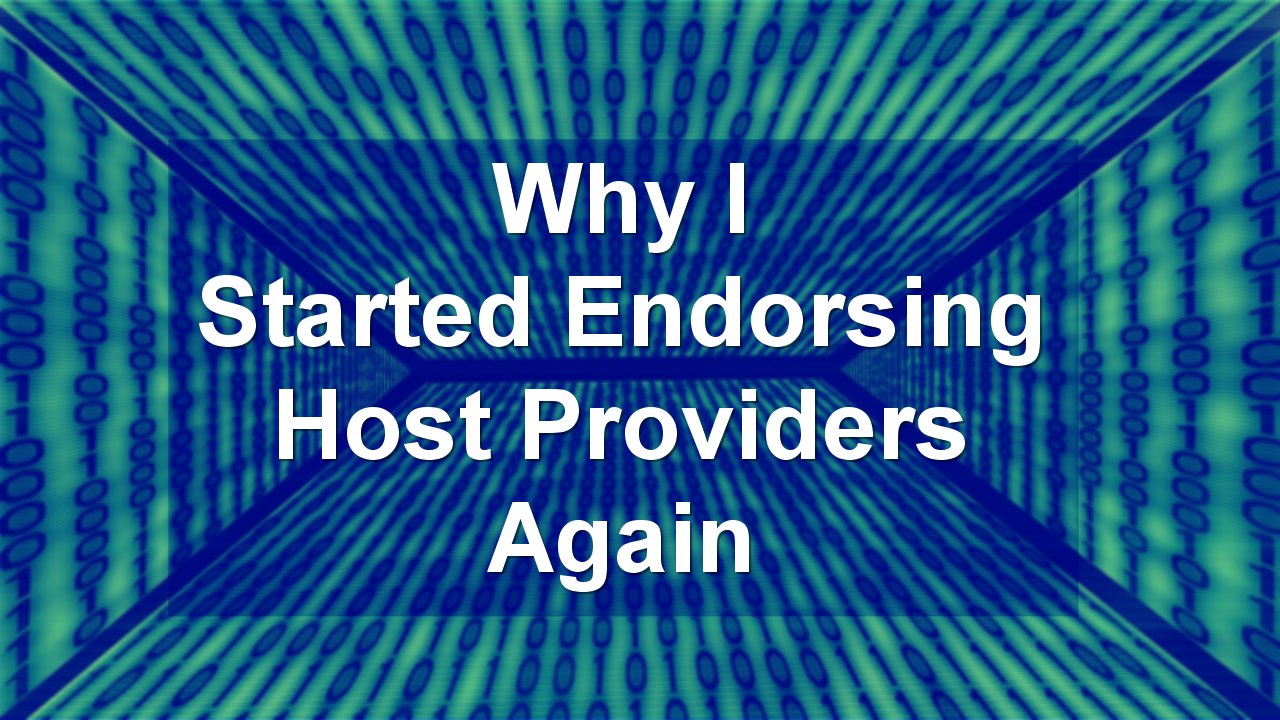 Back in March 2015 I stopped publicly endorsing host providers.  See what’s changed and what hasn’t and the 3 reasons I reversed my decision.

Let’s step back to where all this hoohaa started. In 2013 I had just begun to offer site performance audits when all site security hell broke loose. Since performance and security go hand in hand, I immediately had to pivot my audits to include more checks.

It was a major business pivot and became my core income for the next 2 years.

When It Went South

By 2015, hosts were being DDoS attacked at such an alarming rate that there suddenly was no safe place to put your site. Some hosts were down for 10 days. Some were limping along with sites being intermittently available for weeks.

Angry clients tend to blame the one who said “go here” rather than the 900 botnets that were causing chaos all over the internet.

To protect my trustworthiness, I made the decision to take that 5-figure income out of my business and stop publicly endorsing any host, including A2.

What Changed My Mind

It really came down to 3 things.

2. More hosts have purchased DDoS mitigation services and have taken other measures to shore up their botnet defenses.

3. If Pat Flynn can make $30,000+ a month recommending a crap EIG owned host and still sleep at night, then by golly I can sleep just fine recommending something better!!

(Hey, I’ve got nothing but good vibes for Pat. He’s been seeding my future site audit biz for years now. When site owners get serious about performance and security, they find folks like me. And I help them find a better host while fixing all the other issues that “easy site setup” pitch got them into.)

Everything I wrote in that 2015 post about there being no safe place for your site and that there will be problems with your host at some point is all still true.

That’s our new reality, mine included.

I don’t have any.

Instead, I’ll tell you what I and my clients are having success with at this time.

See my Resources page for what that is today.

And if things go south with those hosts, I’ll tell you where I and my clients move.

I’m in the same boat you are.

I have a site that’s on a host and when things go south, I have to find a new home too.

That’s the best I can do – give you the same advice I’m giving myself.

And that will be true of plugins, themes, and every other item connected to site success.

Things change. We adapt. That’s it.

Going Beyond the Hosting Company

Which host is best depends entirely on your budget, site, and traffic needs.

There is no one-size-fits-all recommendation.

There is no single company that has the right hosting package for all either.

That’s why I’m dedicated to educating site owners so they can make good choices about their site and avoid expensive pitfalls.

The success of your site starts with choosing the right host.

Look for more articles from me on hosting to help you meet your online goals.