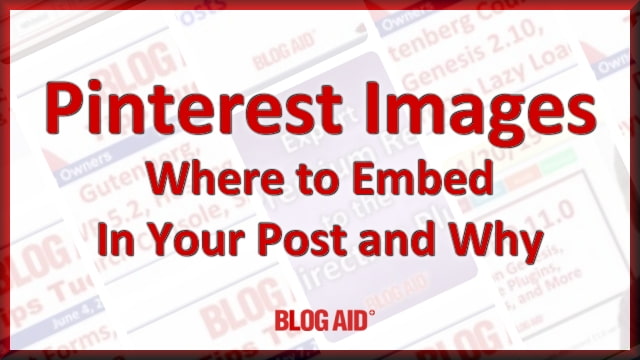 Discover what they said and how their strategies may help you improve your on-page view time and shares.

This was an informal survey.

I’m about to change themes on my woodworking site, which is going all Gutenberg, and will focus on SEO and Pinterest for traffic.

READ: My hobby to money-making site series for more on that site’s journey.

So, I was curious as to what other pro bloggers did with their Pinterest images, as that will impact the new theme and layout I’ll be choosing.

And the replies were so interesting that I wanted to share them with you too.

2. Is the main Pinterest image used for the featured image?

Not everyone answered all 3 questions, but there were certainly enough responses to get a gist of what bloggers were doing and why.

Below are the tallied results.

Why embed at the top?

Most respondents who do this said that they wanted the first image visitors see on the site to match the image the visitor likely clicked on Pinterest.

But, the majority also said that they embed a smaller version of their Pinterest image in the post.

There were no details on whether they simply resized the original image in WordPress or uploaded a smaller image.

My guess is that they are savvy enough to upload another image, as simply changing the display size in WP does not help with reducing the file size. And that affects page load speed.

READ: How to Test Image Optimization for Faster Page Load Speed for more.

READ: Why Image Reduction and Optimization is the Quickest Way to a Fast Site for more.

One person is using unique features in Gutenberg to display the image in a left column and the post excerpt/introduction in the right column. This side-by-side layout holds on desktop, but will be a single column on mobile, which is fine too.

SEE: My Gutenberg Ninja course to learn more about cool features like this.

Image After Intro and SEO

Of those that do embed at the top, most put the image after the text introduction.

There is a myth that this layout helps with SEO. I don’t know of any hard data to prove it where the two layouts were A/B tested against each other. In fact, this myth was debunked in my chat with SEO consultant Brian Weiss in 2018.

The most SEO help that this practice could give you is driving the image lower in the post, past the on_load point of a mobile device, so lazy load could take effect and speed up the page load time. And that matters, big time!!

A fast loading site is not only good for SEO, it could also keep you from losing visitors right at the start. That way they have a chance to see your content, CTAs, and money makers. So, it’s good for the bottom line.

But, you need a pretty long introduction to move an image below the on_load point, even for mobile. Part of that length can come from formatting. Several single sentence paragraphs take up more page real estate than one multi-sentence paragraph.

Another thing to consider is that greeting your visitor with text content immediately is nice for them and may ensure that they stick around for more as the rest of the post loads.

So, maybe it’s not a myth after all. We need more data to know for sure.

Why embed at the bottom?

There were 2 main reasons given from the pro bloggers who include the image at the bottom instead of the top.

Overwhelming, the biggest reason was so that mobile visitors would not have to scroll so much before they got to the content.

The next most popular reason was that big images above the fold affect page load time.

Keep in mind that lazy load does not work on anything above the fold, as mentioned above.

And the last most popular reason was that Pinterest images were there for sharing and not part of the photojournalism of the post. The majority of these Pinterest images have a text overlay on them. Bloggers wanted their images in the post to be plain, meaning no text overlay.

Why Make it Hidden?

Why You Need to Hide Some Images

Several survey respondents were quick to add that they use a premium plugin, like Social Pug, to declare which images on the post are available for pinning, whether or not they are embedded and display in the post.

A good reason to do this is that not only are your embedded images available for pinning, every other image on the page is too, including your logo graphic and all graphics in the sidebar.

So, you need to control which images are available to share. Social Pug can help you do that, and so much more.

READ: Social Pug Review and Settings for more. It was a top winner in both my free and paid social share button plugin tests.

Use as Featured Image?

The main reason given was that their theme was set up to display horizontal images as the thumbnails on the home page and archive pages (like blog and category pages).

I found this interesting as the trend with new themes now is to feature portrait, or longer images in those places.

So, down the road this choice of featured image could impact or limit theme choices.

But, the thing to keep in mind with this is that a good designer can change those image display settings. And in a short while, new posts will overtake older posts on the home page and archive pages, so you can simply chose to change the featured image on the few older posts that display when the new theme is installed and go forward from there with the tower image as featured.

There is no Single “Right” Way

Where you embed your Pinterest image in your post must fit with your goals for that image.

There isn’t a generic rule of thumb to follow.

And what works well on one site or niche may not work on another.

How Do We Know What Works Best?

A few survey respondents shared that they thought tower images at the top of a post performed better than those at the bottom, especially on recipe posts.

I’m not sure what “performed better” means, exactly.

That could be more shares on Pinterest, I guess.

And I’m not sure how that is measured as being shared from the post via the share buttons and that particular image chosen, or folks just saving it from Pinterest directly.

In fact, I’m not sure how anyone is measuring the effectiveness of their choices, or if they are based more on personal preference and anecdotal evidence than hard data.

That also applies to the idea that visitors don’t like to scroll past a large image at the top of a post. I’d like to see hard data on that idea where real site visitors are polled, not other online/niche marketers.

I’m not trying to knock what folks said in the survey or their personal experience and testing.

I’m trying to point out that there isn’t much industry data to back up some of the choices we make about our post structure, and those best guesses could be costing us visitors and money.

It would be interesting to see a deep study on this topic that takes the niche into consideration too, as that could make all the difference into which strategy works best.

Proper image optimization prior to upload is, by far, the biggest bang for the buck you can get when it comes to speeding up your page load time.

And no, image squishing plugins don’t get the job done better, in fact, most don’t even work well, and they can cause you to carry double the images you are storing at your host, and that is the most expensive disk space to rent in the world.

Posts to help you speed up all the images everywhere on your site:

A full site audit finds all the drags on your site and hosting account.

Here are a few posts to help you see what shape your site is in, and ways to get started with improvements: