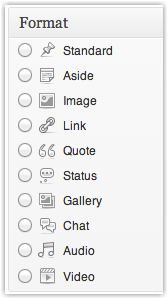 How the new Post Format plugin icons may look.

The new Post Formats UI feature for WordPress 3.6 has been pulled from the core and relegated to a plugin. Mark Jaquith announced the change on the Make WordPress Core blog yesterday, saying that it was a “hard decision” and that an “overwhelming consensus had been reached among the core developers” that the new UI, or User Interface was just not ready yet. This is the piece of the puzzle that has delayed the timely release of version 3.6. Jaquith said he should have made the decision to pull it earlier, but that letting it stay in would have been a worse mistake. Read on for the extraction plans and what this means for your site.

If your theme supported Post Formats, then you’ll see only minor changes with what they leave in. They will enable all formats by default, but the custom screen options will go back to what is there now.

The new audio/video support will be left in the core. That’s important because it marks a step forward toward full adaptation of HTML5.

If you want the rest of the new UI features, they will be available as a plugin that you’ll be able to get once the 3.6 version is released.

What About My Site

If your theme doesn’t already support Post Formats, none of this will really matter to you. Just because WordPress updates the core in any way doesn’t mean that your site will automatically begin to take advantage of the new features.

The exception to that may be the new HTML5 embed code being recognized when you want to include a video or audio snippet in your post.

Many premium themes, including Genesis, only support a limited number, if any, Post Formats now. The emphasis on featuring them in the upcoming release of 3.6 was a way to promote them to more theme designers, among other things.

Some folks complain that so many Post Formats will make WordPress look more like a Tumblr blog, and don’t like them. I’m in that camp too. I think Tumblr is more for casual bloggers who want to share pretty pictures and brief updates. But then, a lot of super marketers have a presence on Tumblr, mainly to drive backlinks to their main WordPress sites.

What do You Think?

Were you looking forward to the new Post Formats feature? Does your blog support them now? Will you be getting the plugin? Let us know in the comments.