In May 2016, Blab decided to require viewers to be logged in to watch Blabs anywhere. That includes on Blab and Blabs embedded on your site, both live and replays. Discover what you need to do to ensure viewers can still enjoy your Blab content.

UPDATE 5/14/16 This is still a fluid issue. This post has been updated with a reply from Blab to Krishna De’s inquiry on Twitter, and a new feature in the SimpleLivePress plugin to combat the issue for embedded replays on your site. (See my MaAnna Minute tour of the plugin updates)

right now login is required so hosts know who is watching their blabs. helps hosts interact with their audience.

Now, before you get your panties in a wad, keep in mind that other platforms have made similar changes and/or never bothered to make announcements about why.

And Facebook is notorious for springing changes on users with no advance notice and no explanation of why.

Plus, most platforms don’t give you a place to officially complain about it either.

But, that is what we thought was different about Blab. They assured us at the beginning that they were listening to users. I think they are listening to potential investors now. Money talks, right?

My Take On It

Requiring viewers to log is the only way to track TOS violations.

Or maybe this is all in an effort to collect better analytics.

That’s the best I can come up with as to why Blab is making this move.

Maybe it has something to do with the new drop-in and screen sharing features. Who knows?

We’re all busy people. And a lot of us just can’t attend every show we want to see when it’s live. That was the beauty of subscribing to a Blab. Made it easy to get an email with the link to watch later.

Or, Blab hosts could email a link, or post on social media as a reminder to visit their site where viewers could watch the embedded Blab and read the show notes.

Now this is what you see in place of the Blab replay. 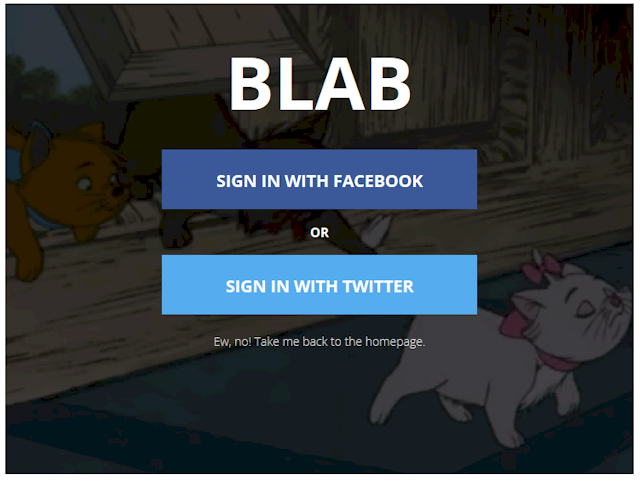 Really? Who’s going to do that?

Instead, viewers are just going to abandon the site.

The SimpleLivePress plugin is a thing of beauty. Developer Hani Mourra outdid himself with it.

It auto-embeds your Blabs on your site in a new post, among other great features.

Well, this latest move by Blab pretty much knocks it in the dirt.

I chatted a bit with Hani in his private Facebook group. He let me know that the login link doesn’t work well on embedded Blabs either. You have to refresh the page to see the replay.

And that’s just one more reason a visitor is more likely to abandon your site rather than watch your video.

Hani came up with a brilliant solution. There is now a new video player in the plugin that displays the Blab replay without viewers needing to be logged in.

See my MaAnna Minute tour of the plugin updates

I decided not to use the SimpleLivePress plugin, good as it is, because I didn’t want to embed all of my Blabs in new posts. (More on that in a moment.) So, I don’t have a lot of posts to revamp or consider what to do with on my site.

UPDATE: I may be rethinking my decision on using the plugin to embed, now that it has the player.

If you have been embedding Blabs, you may want to rethink that now.

For one, they are a performance hit, which was my other reason for not wanting to embed them.

Second, Blab is still very much in beta and we have no idea what other changes they will be making.

The only way around dependency on Blab is to download your Blab and host it on a 3rd party video site, like YouTube or Vimeo or such and then embed that on your site.

Of course, YouTube is the obvious choice. There is even an Upload to YouTube button right on Blab.

The other choice is to use the download link in the email Blab sends after a recorded Blab has finished processing, and then upload the video to YouTube yourself.

In other words, just getting your hands on the video to put on a 3rd party site can be a frustrating time suck.

Another consideration if you decide to go the YouTube route is what Blabs may do to your analytics and ranking.

For example, I do a lot of quick tutorials and my average watch time on YouTube is 4-5 minutes. That’s fantastic!!!! And it does wonders for my rankings if folks are watching the videos to the end.

But that stat of 4-5 minute watch time will tank my ranking if it holds true on hour-long videos, like most of my Blab shows are. That tells Google that folks don’t find my videos interesting enough to stick around.

Since I have several Gmail accounts, I’m seriously considering using a different one for setting up another YouTube account just for my Blabs and other long interviews.

That way I have a video to embed on my site and the longer shows won’t tank my YouTube rankings on the account with all of the quick video tutorials.

Is Blab Still Worth It?

But then, I make money every time I do a show.

I love the new screen sharing feature. In fact, I used it this weekend for a training session. I’ll be using it a lot more in the future.

I’ve decided to only record the shows that I think have evergreen potential.

I don’t have a need to embed shows that don’t have some staying power.

I don’t want to take the time to make them available via YouTube. There’s just not enough ROI beyond the live show itself to make it worthwhile.

Second, Blab no longer displays every recorded show in my profile. So, there’s no way for viewers to find more of them, like they can on my site or on a YouTube playlist.

And that means the only value to me is in the more evergreen, recorded shows that I’ve already decided are worth the extra time to embed by some means where folks can see them without logging into Blab.

I do How May I Help You? Blabs randomly on the weekends. I usually don’t record them. I may rethink that because they generally filled with great tips by answering questions of those who are attending live.

I could download the replay and cut out snippets and use them as quick tip videos.

Those would do great on my YouTube channel and social media platforms too.

However, there is a time factor involved and I have to weigh doing all that work against just making a new video. But, there is a different vibe during a live stream. Capturing that in the moment has an energy to it that I just can’t replicate when recording by myself.

You Can Complain or Make the Most of It

Social media platforms come and go and change all the time. I don’t expect video platforms to be any different.

I’ve decided to ride the wave of them and make the most of whatever they offer, and then move on to next when it seems appropriate.

Blab has been good for my business.

Blab has helped me meet a LOT of new folks and strengthen relationships with folks I already knew online.

What are your thoughts about this latest Blab change?

How’s Blab been working for you and your business?