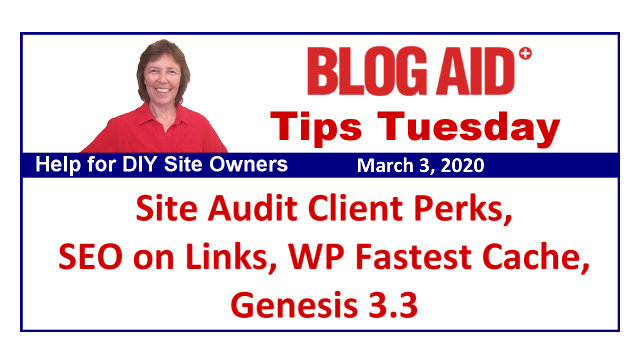 I hope you’ll join for tonight’s livestream at 8pm ET / 5pm PT on the BlogAid Facebook Page. It’s a great way to get the deeper story on what’s reported in Tips Tuesday. And, I almost always have breaking news for the day too. So come join us live for the party.

All tips, advice, and suggestions in this, and all BlogAid posts and tutorials, are intended to empower DIY site owners who are not on hosting that is restrictive in what you can and can’t do with your site and hosting setup.

Spring has sprung around here. We have a string of days in the low 60s that started on Sunday.

It has been so nice to enjoy a little deck time and take Zak for an afternoon stroll.

I’m putting together a little spring cleaning set of quick checks for my Site Audit Plus clients.

We did something similar in the fall to get ready for our holiday traffic.

So, if you’re in the club, look for emails to start coming out soon.

And this coming Friday I’ll be meeting with my Site Audit Plus clients to chat about better ways to use Instagram.

Everybody enjoyed our Pinterest chat back in January. And putting the power of the village to work on how to get more eyeballs is a fun thing to do now and then.

This Thursday I’ll be meeting with my DIY SEO course members for our live workshop on links.

A lot has changed in the past year with the tags we should be using for our links, like nofollow and sponsored.

Plus, a lot has changed with the way Google regards nofollow links too.

And, new data has surfaced about just how radically important our use of internal links are as well.

This is precisely why so many folks stay in the DIY SEO course year after year.

SEO is changing all of the time and you need a systematic way to keep up with those changes and sort through the noise.

We start with your site’s global SEO foundation, then dig into individual topics like link and image SEO. And then we take a super deep dive into your content SEO.

Is Blogging for Dollars Worth It?

And I finally started posting the pallet board dog kennel crate series over on Heartwood Art last week!!!

This thing was supposed to be a fast build and a filler type post. Instead, it took 5 weeks to produce and became a huge time suck at a time I didn’t need that to happen, as this is the heaviest part of my season with BlogAid.

I wrote a post about the new thing I tried and why this thing made me rethink if I want to continue with this side gig journey or not.

So, jump on over and discover what I learned and what the future holds for Heartwood Art.

Several folks have run into issues with adding their Google Analytics code directly to their sites.

That’s especially true if you tried to add it via the Genesis header script in the Customizer.

The issue is due to a thing called ModSecurity at the host.

And while many hosts are just telling folks to turn ModSecurity off entirely, that’s actually a super bad idea, as it eliminates the host’s ability to detect security issues and help protect you from them.

I’ve been working directly with NameHero top tier support on this issue, and while we were able to identify the security rules that are getting tripped, we don’t know exactly what is causing them to trip. It’s a Genesis thing.

I did find a trick to use for getting the analytics code onto the site. But this is actually a bigger issue as some other plugins have been tripping those security wires too.

Once I have a bit of time I’ll write up a post for you with more details, and the tricks we’ve found to get around the plugin and code issues without tanking our site security to do it.

Last week I updated the WP Fastest Cache tutorial for the new mobile settings you need to turn on if you are using the premium version of the plugin and have lazy load turned on.

This week, I updated the tutorial again for how to turn off iFrames if you are using lazy load and are on Mediavine and using iFrames for their video ads.

That way you can use lazy load for images and it won’t conflict with iFrames for Mediavine videos.

So, be sure to check the tutorial again, if you have either of those situations.

I originally published that WP Fastest Cache Settings Tutorial in 2017.

And since then I’ve been making minor updates to it as the plugin changes and improves.

But, none of those updates required enough editing to satisfy Google’s edict that a post should have significant updates to warrant republishing.

To hell with that edict.

That post was still showing up in SERPs but losing rank, and more importantly, losing clicks because it still showed the original post date on it. And nobody wants to read old tech news.

So, during this last update I republished it.

And that sent it out on my RSS feed again.

And that got it picked up on sites that syndicate my blog, like The Daily Bolt.

And that made it one of the top clicked posts again and sent all kinds of traffic to my site.

Revamping old content is a 4-part series of workshops in the DIY SEO course.

We spend a lot of time showing folks how to find old content and making a plan for what to do with it.

Then we go through how to make those changes so it will give you the most SEO benefit without getting you into hot water with Google.

Plus, we talk about Google’s guidelines and when to follow them and how to bend and break the rules occasionally so you can still do well with your posts and ranking.

The latest major release for Genesis rolled out last week with version 3.3.

As far as end users are concerned, it had rather minor updates.

I haven’t heard any screaming about it at all, so I’m calling it safe for folks to update.

Now, if you’re using a specialty Genesis theme that requires extra plugins and such, you’ll want to check with them to see if it’s okay to update yet or not.

Not only can it radically reduce the image file size while retaining excellent quality, it also allows you to save the file in a next-gen format.

See a super tutorial on how to use Squoosh for your image compression prior to upload.

WebP is another new image compression and next-gen format.

It’s made by Google.

There’s a new post over on the ManageWP site that states WebP will be the preferred next-gen format of choice.

I beg to differ.

WebP is still not supported by all browsers even though it’s been out a few years.

But the most significant drawback to it is the implementation.

It’s hard to setup and requires you to have your original images as a fallback. And it loads all of those images on each page and post, which is cra cra.

And here’s the thing that just makes me say nope.

Google has a LONG history of creating a “me too” thing that only they support.

And then they make it hard to use.

And then they complain that it has low adoption rate.

And then they kill it.

There is no way in hell I’m trading over all of my images to a format that may not even be around in a few years.

So, I’m sticking with MozJPEG for now and enjoying fast load times plus a good score on Google Page Speed Insights, as that is a recognized as a next-gen format.

The final release of WP 5.4 is not due until March 31, and that means they will have had the beta releases out for a full month prior.

That’s good, as it gives more folks, including plugin devs, a chance to test it.

And that’s good because it likely means less bugs in the final release.

There are a bunch of great Gutenberg features coming in WP 5.4 and I’ll have a video tour and post out for you as we get closer to the release.

I’ll also be updating my Gutenberg Ninja course with the new features soon too.

WordPress has two feature plugins that are nearly ready to go.

A feature plugin is a new function they want to eventually roll into the core of WordPress, but they make it a plugin so folks can test it as it is being developed first.

The Lazy Load feature just missed the WP 5.4 beta deadline. And we now have confirmation that lazy load will be included in WP 5.5.

I wrote a post about lazy load back at the first of Feb, when the rumor broke that it might be in WP 5.4. So, go have a look at it to see why we won’t be using this feature if we have lazy load in our premium caching plugin, and why those premium plugins do a better job of it.

Plugin and theme auto updates is also a feature plugin right now and is targeted to be rolled into WP 5.5 too.

Now, a lot of plugins and themes already have this feature for minor updates. I bet you didn’t even know you had that turned on for many of your plugins, huh? And most plugins made it an opt-out feature.

That’s because those minor releases include both bug fixes and security fixes, and we want those as soon as they roll out.

So, I’m thinking this core code coming to WordPress will help standardize this function. And it will give us a dashboard view so we can see which plugins and themes we have selected to allow auto updates on.

I don’t know if major updates will be included in this or not. My guess is no. We’ll see as it gets closer to release this summer.

But, with these two major changes coming in 5.5, I can say for sure now that we will not be the first to update to it!!!

Let’s just get through this upcoming 5.4 update at the end of this month first, right?