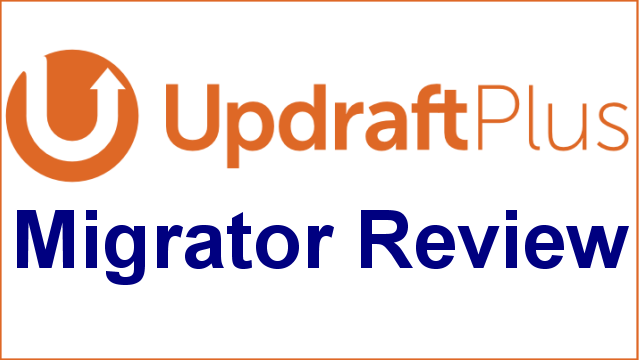 This little plugin is the BOMB for migrating WordPress sites. See why I’ve come to rely on it and why I recommend it for all designers and webmasters.

This post is part of a full series on the UpdraftPlus suite of plugins and backup solutions.

Thank you for using my affiliate links to purchase UpdraftPlus products!
You are helping to support all of the free, helpful info here on BlogAid.

The premium version of the UpdraftPlus plugin has a feature to clone a site from the backup files.

The Migrator Add On Plugin is a chip off that block and singularly provides that cloning feature at a much reduced cost and overhead.

THIS is the top reason I like the Migrator plugin so much.

It has a feature that allows you to transfer the backed up files from the original site directly to the clone site.

That is the BOMB!

No more downloading and uploading of files.

When you run a business where time on site is money, this little plugin pays for itself in one use.

This feature also ensures that you don’t miss copying any files over to the clone site.

I often do migrations during off-peak traffic times, meaning late at night after an already full day at the desk.

Any tool that ensures I don’t miss a file or a step in that migration is worth paying for.

Another feature I really like about Migrator, and all of the UpdraftPlus backup plugins, is that I can restore individual zip files.

The plugins backup in neat segments.

The individual zip files include:

I can restore each zip file individually and verify that it was successful.

And that beats the heck out of a one-lump backup file that hangs due to timeouts or resource overages at the host. With those, I simply have to start all over again.

Search and Replace Built In

When migrating a site to or from a sandbox, the domain name has to be changed.

Migrator has a checkbox in the database restore to automatically do a search and replace on all links in the database. That includes the canonical of the domain in the WordPress settings too.

Compared to manually moving site files and database, this is one less step you have to perform.

Migrator, and all UpdraftPlus plugins, don’t bite off more than they can chew.

On sites with tons of huge images, it breaks up the Uploads zip files into smaller chunks.

And each one is sequentially numbered, so there is zero confusion about which one is what.

That also makes those files easier to download, or transfer to a clone site or backup storage.

And, it keeps the plugin from causing system overages of the host resources. (Given that the hosting has enough headroom to take backups and temporarily store them on the account.)

Unlike the premium version of UpdraftPlus, which also has a cloning feature, the Migrator plugin does not require a license to use.

That means you can install it on a client’s site, do the migration, and then delete it.

You don’t need a license for each site.

In other words, you can use it on unlimited sites.

I can’t think of a better bargain for a designer or webmaster.

Updraft calls Migrator an add-on plugin. But it’s not.

It’s a totally standalone plugin that is not used in conjunction with anything else.

So, if the original site has any version of an UpdraftPlus backup plugin installed, it has to be deleted before installing Migrator.

The saving grace with this is that all settings and on-site backups from the original UpdraftPlus plugin are permanently stored in the site files.

When Migrator is deleted and the original plugins restored, everything is just as it was.

I also don’t care for the lack of proper labeling in the plugins list.

No matter what version of UpdraftPlus you have installed – free, premium, Migrator – the label in the plugins list is the same.

That, combined with the fact that you have to delete a regular backup plugin to use Migrator, could lead to a missed step or confusion.

Like I said, I do migrations late in the day, and can easily overlook the last step of deleting Migrator and reinstating the client’s backup plugin.

And the client won’t have a clue either because there is zero indication in their plugins list. They might think their backups are still running on their regular schedule, and they would not be.

I would like to see Updraft add two things:

Icing on the cake would be a toggle to dismiss that nag notice.

Migrator is a must-have tool for designers and webmasters.

It’s low cost and unlimited use are the best migration bargain available.

The fact that it can handle bigger sites without causing host system overages is a huge plus.

Saving time with direct transfer of files is the clincher for me.

The caveats I mentioned are super small and in no way affect the performance of the plugin.

Plus, Updraft Support is quick to respond and helpful. And, they are always open to ways to improve their products.

I’m know for testing plugins to within an inch of their life before I recommend them.

The UpdraftPlus Migrator plugin has passed that test.