A LOT of big changes are being packed into the next major release of WordPress 5.3, which will roll out in November.

They include a whole gaggle of Gutenberg updates too.

Get a sneak peek at what you’ll see and changes you need to know about in the upcoming release.

You can see all of the Beta 1 release notes here of what is proposed to roll into the core.

The Gutenberg plugin is where WordPress adds and tests block editor improvements first. And as they get them nailed down, they are trickled into WordPress core releases.

I’m stunned that the plugin was allowed to advance so far past what is in core, and that more enhancements have not been released sooner, like in WP 5.2.

So, that means LOTS of block editor improvements will be included in WP 5.3, and boy am I ever happy about that!!!!!

I’ve been waiting on 2 of those enhancements to roll into core so me and all of my Gutenberg Ninja course members can get rid of that beta plugin!!!

I only included those tutorials to future-proof the course. I never dreamed it would take WP this long to roll those basic features into the core.

WordPress has continually improved the load time of Gutenberg since its initial release.

WP 5.3 will once again shave another 1.5 seconds off the load time, which is the most significant speed up effort to date.

So, that’s why it has such a dramatic speed increase number.

For most bloggers who create 2,000 word posts, you’ll only see a fraction of load improvement. But we’ll take all of the help we can get with regard to speed!!

A HUGE complaint about Gutenberg during its initial release was how poorly it scored on accessibility testing, especially for the visually impaired.

An independent audit was conducted and a map laid out for what needed improvement and the devs have been including those in every release since.

WordPress 5.3 accessibility improvements in the admin area include:

This is so subtle that you might have a hard time seeing the difference, but the login screen, and modules on the admin pages have a little more sharpness to them, and an extra shadow.

It stood out to me more on the login page than on these dashboard modules. 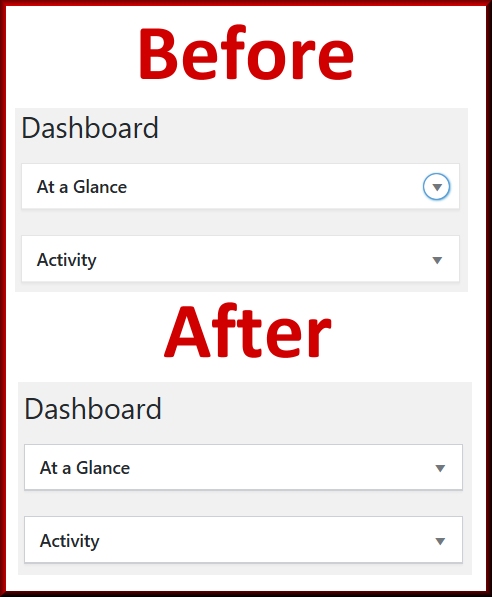 At first look, I’m in total disagreement with these “improvements” for images.

Here’s the exact description WP gives about it:

“Uploading non-optimized, high-resolution pictures from your smartphone isn’t a problem anymore. WordPress now supports resuming uploads when they fail as well as larger default image sizes. That way pictures you add from the block editor look their best no matter how people get to your site.”

You need to optimize images PRIOR to upload if you want to have any shot at a fast site.

See the Speed section on my Helpful Posts page for more details, including a super tutorial that makes it fast to optimize your images and get them into the modern file types that Google will love you for.

Nine years ago, someone proposed a feature that would auto rotate an image during upload. I presume that is for images taken via phone.

There is an EXIF orientation process to this, so I hope this doesn’t goof up sites that are heavy with Pinterest type tall images, or a mix of orientations.

We’ll need to keep our eye on it.

More Site Health Check features will be coming to WP 5.3.

This is actually a much bigger function, and they are slowing, and carefully rolling more parts of it into the core.

It helps with troubleshooting issues, like getting the whitescreen of death and such, and has a way for you to still access your site if that happens.

A new email address verification system will also be introduced.

Every six months it will send you a notification to verify that you still have the same admin email address, or a way to update it if you have changed it.

I don’t think I’ve ever even heard of anyone getting locked out of their site over this. But then, none of my clients use an email address as their username for their login either. This was a common practice with 1-click installs years ago, so maybe it’s a bigger problem than I know about.

I’m thinking they ought to add a way to opt out of this, though.

One of the key security issues I’m delighted to see WP get super serious about addressing is the minimum PHP version required.

They started with version 5.6, which everyone complained was too low, as support for that had already dropped when they implemented it.

With the release of WP 5.3, they are also upping the highest version supported, which is 7.4. That version is not even on most hosts yet. But, I’m thrilled they are testing WP up to that level now.

READ: My tutorial on How to Check or Change Your PHP Level for more details.

This is a serious security concern that you can’t ignore.

Go all the way up to PHP 7.3 for now, if you can. That will keep you good for at least another year.

The WordPress 5.3 update will also auto-install the latest default theme.

Be sure you delete it after you upgrade, as well as all other themes you are not using, as each one is a potential security hole.

Maybe some day they will stop including these auto theme installs on upgrades, and just have them for new installs.

The WP devs have been working super hard for the past year to address long-standing bug reports.

I’m thrilled they are just as committed to ensuring what we have works well as they are to bringing us all these wonderful new features.

Since this is a major release, meaning that we are going from 5.2.x to 5.3, it will not auto update.

And, because there is so much packed into this release, we will not be the first to upgrade to it either.

Follow Tips Tuesday posts/podcasts/livestream closely for the a-okay on when it’s safe to update.