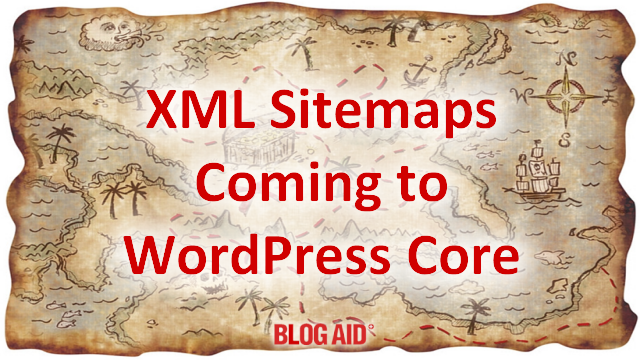 An XML sitemap is like a treasure map of links to your site’s content that’s made specifically for search engine bots to read.

That’s why we have to use plugins like Yoast SEO to generate one for us.

Now WordPress, Yoast, and Google are conspiring to bring XML sitemap generation into the core of WordPress.

Discover what’s on the drawing board for this proposal, and what it means for your SEO.

What is an XML Sitemap?

An XML sitemap is a data set, or collection of links on your site that is meant to be read and acted upon by search engine bots, like Googlebots.

The map helps Google discover the URLs on your site.

The extra XML data helps Google make sense of the relationships of those links on your site.

The descriptions also tell Googlebots if the link is for a page, post, image, etc.

What Creates the XML Sitemap?

WordPress has evolved from a simple blogging platform into a full CMS (Content Management System).

And while it does a superb job of organizing your content links internally, it does not generate an XML sitemap of them that is publicly available for bots to read.

That’s why we need to use plugins like Yoast SEO and others to generate that sitemap for us.

And Yoast SEO generates a master sitemap with all the other sitemaps included within it.

Check What’s in Your XML Sitemap

If you are using the Yoast SEO plugin, the XML sitemap generator is turned on by default and is creating your XML sitemap.

Here’s the link to the master XML sitemap on BlogAid

You can see yours by substituting your domain for blogaid.net in the above link.

As you can see, within the master sitemap, I have 2 post sitemaps, 1 page sitemap, and 1 category sitemap.

And each of those individual sitemaps contains the links I want Googlebots to find, crawl, and index.

Those sitemaps don’t contain any links that I don’t want Google to find, crawl, or include in SERPs, meaning that I deliberately configured Yoast SEO to exclude them.

What you see in your sitemap list is entirely dependent on how you have configured the Yoast SEO plugin for your site.

It’s more important than ever to get your SEO plugin set up right.

My DIY SEO course has a whole section devoted to it.

That includes everything you need to know about what to include in your sitemaps, how to exclude things, and how to submit the master sitemap properly to Search Console.

WordPress introduced schema markup support into the core in 2013 with version 3.6. But they really haven’t focused on SEO related elements much since.

Adding native XML sitemap generation to the core is a great step forward in this area.

And they want to ensure they do it right, as doing it wrong could cause huge SEO problems for millions of site owners, as well as all SEO related plugins.

To that end, WordPress is teaming up with both Google and Yoast to get this thing right on the first go.

Like most every big WordPress core change, it will start as a Feature Plugin.

Structured data markup started that way, as did Gutenberg, which still is a Feature Plugin that has new Gute elements to be tested before rolling into the core. It will likely remain a Feature Plugin for at least 2 more years.

What Will Be Included in the New XML Sitemap

Here’s what the WP dev team says about this new project:

“…the goal of the proposal is to integrate basic XML Sitemaps in WordPress Core and introduce an XML Sitemaps API to make it fully extendable.”

They intend to include the following sitemap types:

These are much the same elements included in Yoast SEO and other SEO plugins that generate XML sitemaps.

Sticking with the Basics

The WordPress devs are clear that they want to stick to the basics with the first iteration of the new XML Sitemap Feature Plugin.

And it won’t be difficult for XML sitemap generating plugins we have now to coordinate with what will eventually be rolled into the WP core.

What will be difficult is for XML sitemap generation plugins to keep two versions supported – one that has to integrate with the new Features Plugin, and one that doesn’t.

Hopefully, that’s what the inclusion of the XML Sitemaps API will solve.

The SEO plugins we have now will be able to auto detect if you are using the XML Sitemaps Feature Plugin or not and cooperate either way.

What Will Not Be Included

Following are the sitemaps WP devs are currently calling “non goals” and will not be included in the first iteration of the new XML Sitemaps Feature Plugin.

What’s most interesting about this list is that most current SEO plugins don’t include these things in their free XML sitemap generators either.

You can get premium (paid) add-ons for several of them, though, like Video and News.

That’s not just so SEO plugin devs can get paid. Those add-ons are super tricky to develop. In fact, I can’t use the default way Yoast does the Video SEO plugin because I use iframes to embed my videos so lazy load can be applied to them. The plugin can’t natively handle that and it requires extra coding.

Same with doing news sitemaps, and then that also gets into supporting AMP (Google’s Accelerated Mobile Pages).

Why No Image Sitemap?

Over the past 2 years, Google has been actively focusing on image SEO.

I think they have a Pinterest-wanna-be complex.

I’ve always wondered why Yoast SEO did not provide a separate XML sitemap specifically for images.

He has actually addressed this topic in multiple articles and posts with the following explanation.

Yoast includes the actual URL to an image within the page and post sitemaps.

This way Googlebots can index it within context, and that’s crazy important.

(I teach why this is so in the DIY SEO course.)

In fact, I’ve read/heard Yoast say on several occasions that this is the way Google prefers to discover image URLs.

If an image XML sitemap were to be generated, it would be on the image’s Attachment Page, and that’s not good. It’s just a standalone image that is out of context to how it is used on the site.

Tell Bots Where to Find the XML Sitemap

This made me laugh when I read it in the proposal.

WP will modify your robots.txt file to include a link to the XML sitemap.

I have ALWAYS maintained that link was necessary.

Other SEO pros, including Yoast, said no. Their reasoning was that if you are verifying your site with Google Webmaster Tools, it doesn’t need that link.

Well, yeah, if Googlebots were the only search engines crawling your site!!!

And we need that link for all bots, including Googlebots.

I’m glad to see that it will be included.

When Will the new XML Sitemap Plugin be Available?

This is a complex project and the WP devs have just now announced the formation of the ideas behind doing it.

They are also asking for contributors to work on the project.

So, it will be many months of meetings to even hash out where to start, much less get down to actually coding the thing.

However, Yoast already pays several of their team members to exclusively volunteer on core WordPress development.

And with Google also providing either guidance and/or volunteers, this thing may get off the ground quickly.

It’s not like WP is going to have to invent the wheel from scratch here.

When I’ll be Testing

I will be waiting until they have the first several versions of this thing rolled out before I’ll start testing.

But what I will be keeping close eye on are any changes that come to Yoast SEO because of it.

They’ve been making great strides with Gutenberg integration that I already cover in my Gutenberg Ninja course.

And I expect them to stay well ahead of the curve on any forthcoming WP changes with regard to SEO too.