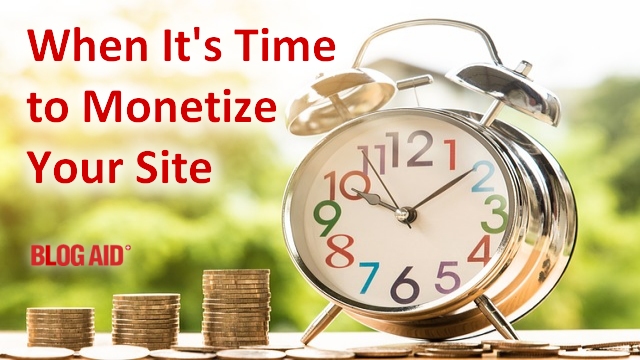 The goal of so many new bloggers is to make money from their site.

But when and how to monetize is different for everyone.

Discover why I chose to start monetizing Heartwood Art after only 9 months and with only a few blog posts.

I Gave Myself 1 Year

I started the total revamp in focus for Heartwood in January 2019 – just 3 months after moving into my new house that had a huge garage space to build a woodworking shop.

It’s now mid September – 9 months later. And I’m checking in to let you know how I’ve done with turning a hobby blog into a money-making site.

My goals for the year were clear.

Here are my goal highlights:

I didn’t count on needing to remodel the part of the garage I’m using for the workshop.

It costs a pretty penny to have that floor cleaned and painted. Plus having to repair and paint the one sheetrocked wall. And all of that was delayed because it was dead of winter and the work had to be done on “nice” weather days when the temps were warm enough.

That delayed me getting started by 2 months.

I also didn’t count on the delay of researching good ways to take still shots and make videos and needing to get and learn a pro DSLR camera.

That delayed me another month.

So, I didn’t really get going with my posting plans until March.

That means I’ve crammed all of the progress I’ve made into just 6 months, and while doing it part-time as a side gig.

You can read more about that first 3 month journey and overcoming delays here:

During my workbench build I unexpectedly came across a high-engagement topic.

Who knew there were so many strongly held opinions about what to use for a benchtop and how to attach it!?!

I VERY much want to do a talking-head video on that, as it will likely generate a ton of comments anywhere folks see it posted.

Sometimes you don’t want to run away from controversy.

Some days you want to dive in headfirst.

I’ll do that video, but not right now.

I’m pretty proud of how far I’ve come in only 6 months of blogging and promotion!!!

One of them had over 200 views. That’s pretty good considering the rest of my posts only get 30 views.

So, while my videos may not be the first one found in a YouTube search, they are still getting eyeballs from the good SEO on them.

I have impressions in the hundreds, overall.

And about 30 clicks to the site.

All of this in one day.

While those are not big numbers overall, they are the biggest I’ve had since I started this venture. That’s a clue.

Best guess is that Pinterest doesn’t have enough content in that niche and went looking for a fresh pin and found mine.

That let me know I’m on the right track for Pinterest SEO, and ALL of my SEO research has been worth it.

It’s September. The holidays are right around the corner.

I was hoping to have all of my major shop builds done by now.

But, I ran a big sale on BlogAid over the summer and wow, did folks take advantage of that.

So, I’ve been at my desk doing some overtime with it instead of in the shop.

But, I want to stay on track.

So that means I need to let that last build go, finish my workbench build series of posts (the bench is already finished), and move on to monetizing the site with Amazon affiliate links.

Gutenberg’s reusable blocks and templates are absolutely key to the way I want to display Amazon links on all posts and on round-up/list pages.

This will make it SO easy for me to keep links for tools updated everywhere on the site.

That’s a huge deal, as broken links keep me from making money in two ways:

See my Gutenberg Ninja course for details on how reusable blocks are the key to making money.

I’m already seeing traction from my SEO and promotion on social media platforms.

And that huge Pinterest hit was the trigger to let me know this stuff could take off any day.

I need to be ready to capitalize on that traffic.

I may or may not get another big hit like that for a while again.

But I do know that folks are searching heavily for holiday shopping.

So, even without that big hit, it’s time.

So, postponing another build, and doing a gift-giving guide instead, is the proper priority to have now.

Tools are a natural fit for doing affiliate products.

In fact, that has a lot to do with why I bought the brand I did for my hand-held power tools.

Not to mention all of the social media followers for that brand – and their hashtag that gets LOTS of eyeballs on Instagram and Pinterest.

Second, I don’t have enough traffic to do any other type of monetization yet – like sponsored posts, sponsored ads, or going with an ad network like Mediavine.

FYI, I can tell you now that I won’t be going with ANY of the low-barrier-to-entry ad networks as all of them suck. You take a huge hit on site speed, and the user experience is horrible. I’ll wait until I qualify for a good ad agency, like Mediavine. (My clients who have qualified for the higher entry AdThrive all came back to Mediavine. They are that good, not only for money, but for support, and a constant focus on speed and user experience.)

I’ve been in the Amazon Affiliate program for both BlogAid and Heartwood Art for years. I’ve just never promoted it well or used it much.

Back when I was doing it they still had their A-stores.

Things have changed a LOT with Amazon and affiliate marketing in general since then, and I need to get up to speed.

So, I’m hiring one of my clients who is having Amazon affiliate success to help me hit the ground running with it again.

My time is WAY too valuable to spend searching the internet for info that may very well be outdated or just down-right wrong, or not include everything I need.

It’s WAY cheaper for me to pay for that info from someone who is actively doing it right now and to get the whole picture all at once.

That way I can make a checklist of what I need to do and simply work it, and know that it’s right.

Monetization Outside of the Norm

THE reason I’m building a woodworking shop is to make wood art.

I’m doing posts on building the shop right now because that’s where I am with it.

Plus, doing posts for beginners on how to use woodworking tools are always in demand and I plan to do LOTS more of those. Again, evergreen content.

Videos and courses and books on how to create that art are big sellers too.

(Not to mention I have a book deal waiting in the wings for my wood carvings.)

I may never run an ad on the site.

As I mentioned, I already have my first art project on the drawing board.

It’s a simplified version of the types of wall art I want to make.

It will teach me all of the basics for doing that type of work.

I’ll start on it after I get the site monetized and that gift-giving guide done.

That will be my treat for having met every goal I set for myself with this site for this year.

And then it’s just working the plan I’ve laid out from there, including having fun!